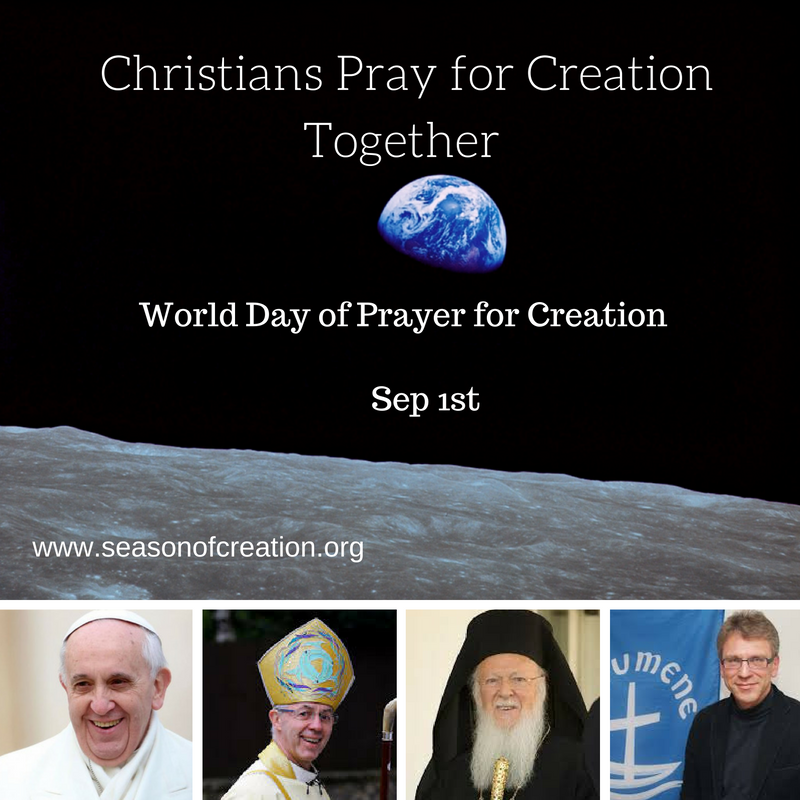 On September 1 Christians churches will come together to celebrate the World Day of Prayer for the Care of Creation, and to observe the Season of Creation between that day and October 4 – the Feast of St. Francis of Assisi. Major Orthodox, Catholic, Protestant, and Anglican organizations have joined to encourage the 2.2 billion Christians worldwide to pray and act on ecological issues next month, promoting a new ecumenical website with special resources, SeasonOfCreation.org.

Watch THE POPE VIDEO – the respect of Creation – for September 1st

You can find this video in this website (seasonofcreation.org) The Pope Video which was originally released last February and was showcased in Krakow before the WYD final mass of Pope Francis (3 million pilgrims). (International, August 18th 2016).- Pope Francis instituted September 1 as the World Day of Prayer for the Care of Creation in 2015, joining the ecological efforts of the Orthodox Church, as Ecumenical Patriarch Dimitrios I proclaimed this day of prayer for creation in 1989. Other major Christian churches have joined as well in the past decade. This year, the Pope’s Worldwide Prayer Network, through its project The Pope Video, has prepared a special video of Pope Francis to promote the day of prayer and the Season of Creation ecumenical initiative.

The World Council of Churches and other Christian churches have started celebrating the month-long “Season of Creation” (also known as Creation Time) between September 1 and October 4, which is the Feast of St. Francis of Assisi, Patron Saint of Ecology. And several Catholic bishops conferences have also joined the celebration of this special time for creation, with the precedents of the Catholic Bishops of the Philippines in 2003 and the Council of the Bishops’ Conferences of Europe (CCEE) in 2007.

“We urgently need to make changes,” said Fr Frédéric Fornos, International Director of the Pope’s Worldwide Prayer Network and EYM. “All the Pope’s Worldwide Prayer Network is involved in this World Day of Prayer for the Care of Creation, by prayer and action to preserve our “common home” for future generations. “O Lord, seize us with your power and light, help us to protect all life, to prepare for a better future, for the coming of your Kingdom of justice, peace, love and beauty” (Laudato Si n° 246).

The collaborative effort amongst the different traditions in 2016 will be two-fold, encouraging both prayer and action for creation. For this purpose, an ecumenical website has been developed under the address SeasonofCreation.org to be used as a hub for compiling resources and information about the campaign.

“As the world continues to witness record breaking heat, we Catholics need to respond to the dramatic call to action of the Holy Father in Laudato Si’”, said Tomás Insua, Global Coordinator of the Global Catholic Climate Movement. “And the World Day of Prayer for the Care of Creation is the perfect opportunity for Catholic parishes and communities to deepen their ecological engagement and join other Christians to take action during the Season of Creation.”

Individuals and communities are invited to organize prayers services celebrated at local levels which will be showcased on a global map to illustrate the scale of the collaboration. Individuals are also invited to participate online through Facebook events and Thunderclap campaigns to promote the #SeasonOfCreation hashtag.

Participants are encouraged to also engage in some kind of advocacy initiative as a way to bring their prayer into action. Different campaigns are compiled and posted on action hubs on the Season of Creation website. Additionally, a common advocacy effort will be pursued calling for the urgent signing and ratification of the Paris Agreement, while coinciding with the U.N. General Assembly.

NOTES FOR THE EDITOR

For over a century, the Apostleship of Prayer has been publishing to the world the prayer intentions entrusted to them by popes. Now, in its process of recreation, the Pope’s Worldwide Prayer Network emphasizes its role of communicating the prayer intentions and leveraging new media and tools. Its mission is to unite people in prayer and service in response to the challenges facing humanity that the Holy Father expresses in his monthly intentions. Those who participate in this network are encouraged to become apostles in daily life through a spiritual path called “Way of the Heart,” transforming those who take that path in the service of the mission of Jesus Christ. Founded in 1844 and present in over 100 countries, the Apostleship of Prayer unites more than 35 million people in its network, including its youth branch, the Eucharistic Youth Movement. For more information: //www.popesprayer.va.

About the Global Catholic Climate Movement

Founded in January 2015, the Global Catholic Climate Movement is a network of over 350 Catholic organizations working to respond to the moral imperative of the climate change crisis. Further information can be found at http://catholicclimatemovement.global/