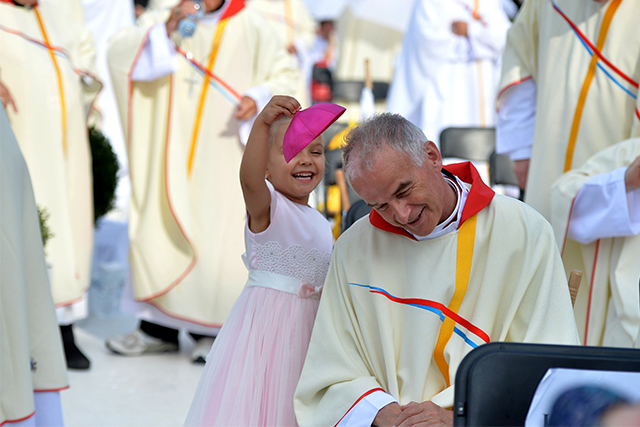 Let us pray that priests, who experience fatigue and loneliness in their pastoral work, may find help and comfort in their intimacy with the Lord and in their friendship with their brothers and sisters.

Paul, John the Baptist, and Maximilian Kolbe — along with many other shepherds throughout the ages — not only lived out solitude, abandonment, and persecution, but also the “nearness of the Lord”, especially in moments of trials. In his homily during Mass on Tuesday, 18 October in the chapel at the Casa, Pope Francis reflected on the invitation to rediscover the presence of God always, even in times of suffering and illness.

In his meditation, Francis centred on the passage in the day’s reading from the Second Letter of Saint Paul to Timothy (cf. 4:10-17). “Paul is in Rome, imprisoned in a house, in a room, with some freedom, but waiting for he knows not what”, the Pope explained. “In that moment Paul feels alone”: it is “the solitude of the shepherd when there are difficulties, but also the solitude of the shepherd when approaching his end: stripped, alone, and a beggar”. And thus the Apostle writes to Timothy: “Get Mark and bring him with you; for he is very useful in serving me. When you come, bring the cloak, as well as the books” (2 Tim 4:11, 13). Therefore, Paul is “alone and a beggar: he begs Timothy for his few belongings since they might be of use to him”.

The apostle is also the “victim of rage”, the Holy Father said, to the extent that someone says of him: “He is enraged by our preaching!”. Paul is “alone, begging, a victim of rage”. Moreover, “he speaks that very sad word: ‘all deserted me’”. During the trial, he is left without help, recognizing that “only the Lord Jesus stood by me”.

Although the Apostle is “alone, a beggar, a victim of rage, deserted”, Francis explained, “he is, however, the great Paul, the one who heard the voice of the Lord, the call of the Lord; the one who went from one place to another, who suffered many things and many trials for the preaching of the Gospel, who made known to the Apostles that the Lord also wanted the Gentiles to join the Church”. He is “the great Paul who, in prayer, was lifted to the seventh Heaven, and felt things no one had felt before”.

But now, “the great Paul” is “there, in that tiny room of a house, in Rome, waiting to know how the struggle between the factions in the Church will end, between the rigidity of Judaizers and those disciples faithful to him”. And “so concludes the life of the great Paul, in desolation: not in resentment or bitterness, but with interior desolation”.

For the rest, the Pope observed, “Jesus had told Paul he would end up like Him”. Indeed, “all of the apostles ended up thus: ‘When you are old, you will hold out your hands and another will fasten your belt and carry you where you do not want to go’”. This, the Pontiff explained, “is the end of the Apostle”.

“From this small room of Paul”, Francis said, we are reminded of two great figures: John the Baptist, and Maximilian Kolbe. The first of these, “in his cell, alone, in anguish, sends his disciples to ask Jesus: ‘Is it you, or must we await another?’. And then, on the whim of a dancer and the vindictiveness of an adulteress, he was beheaded: thus ends the great John the Baptist, who Jesus said was the greatest man to be born of a woman”.

And even now, “closer to us”, the Pope said, “we think of the cell of Maximilian Kolbe, who took apostolic action throughout the world and did many great things: he is in that cell, starved, waiting for death” in the Nazi concentration camp at Auschwitz.

“When he is faithful, the Apostle does not wait for any other end than that of Jesus”, Francis said.

Indeed, there is the “stripping of the Apostle: he is stripped, left with nothing, because he was faithful”.

This is the mindset of Paul, Francis said: “Only the Lord is my neighbour”, because “the Lord does not leave him, and there he finds his strength”.

Thus is “the end of Paul”, he said: “After about two years, living in such a way, in uncertainty, in this anguish within the Church, two soldiers came one morning, took him, brought him outside, and cut off his head”.

It is natural to ask how such an end could fall upon “so great a man, one who changed the word with his preaching, who convinced the Apostles that Jesus came even for the Gentiles, who did so much good, who struggled, who suffered, who prayed, who had the highest contemplation?”.

Yet, “this is the law of the Gospel: if the seed of the grain does not die, it does not bear fruit, since this is the law which Jesus himself revealed to us with his person”. However, it is with certainty that then “Resurrection comes”.

“One of the first-century theologians”, the Pontiff recalled, “said that ‘the blood of the martyrs is the seed of Christianity’”. In “dying as a martyr, as a witness of Jesus”, one is “the seed that dies and bears fruit, and fills the earth with new Christians”. And “when the shepherd lives thus, he is not disheartened: he may be desolated, but he has that certainty that the the Lord is beside him”. On the other hand, when “the shepherd, in his life, is occupied by things other than the faithful — he is, for instance, attached to power, attached to money, attached to networking, attached to many things — in the end he will not be alone; perhaps there will be grandchildren who wait for him to die in order to see what they can take with them”.

Francis shared his experience of “going to visit a nursing home for elderly priests” where, he said, “I find many of these brave priests who have given their lives for the faithful and are there, sick, paralyzed, in wheelchairs; however, one quickly sees that smile because they feel that the Lord is very close to them”. One certainly cannot forget “those bright eyes they have and which ask: How is the Church going? How is the diocese going? How are vocations going?”. These are the concerns which they have within them “until the end, because they are fathers, because they have given their life for others”.

In conclusion, the Pontiff reiterated the witness of “Paul alone, a beggar, a victim of rage, abandoned by everyone, except the Lord Jesus: ‘Only the Lord stood by me!’”. This is because, the Pope stressed, “the shepherd must have this security: if he takes the path of Jesus, the Lord will be close to him until the end”.

Thus, he invited the faithful to pray “for shepherds who are at the end of their life, and who are waiting for the Lord to carry them with Him”. We pray, he said, “that the Lord might give them the strength, consolation, and security that — although they feel sick and alone — the Lord is with them, near to them: that the Lord may give them strength”.