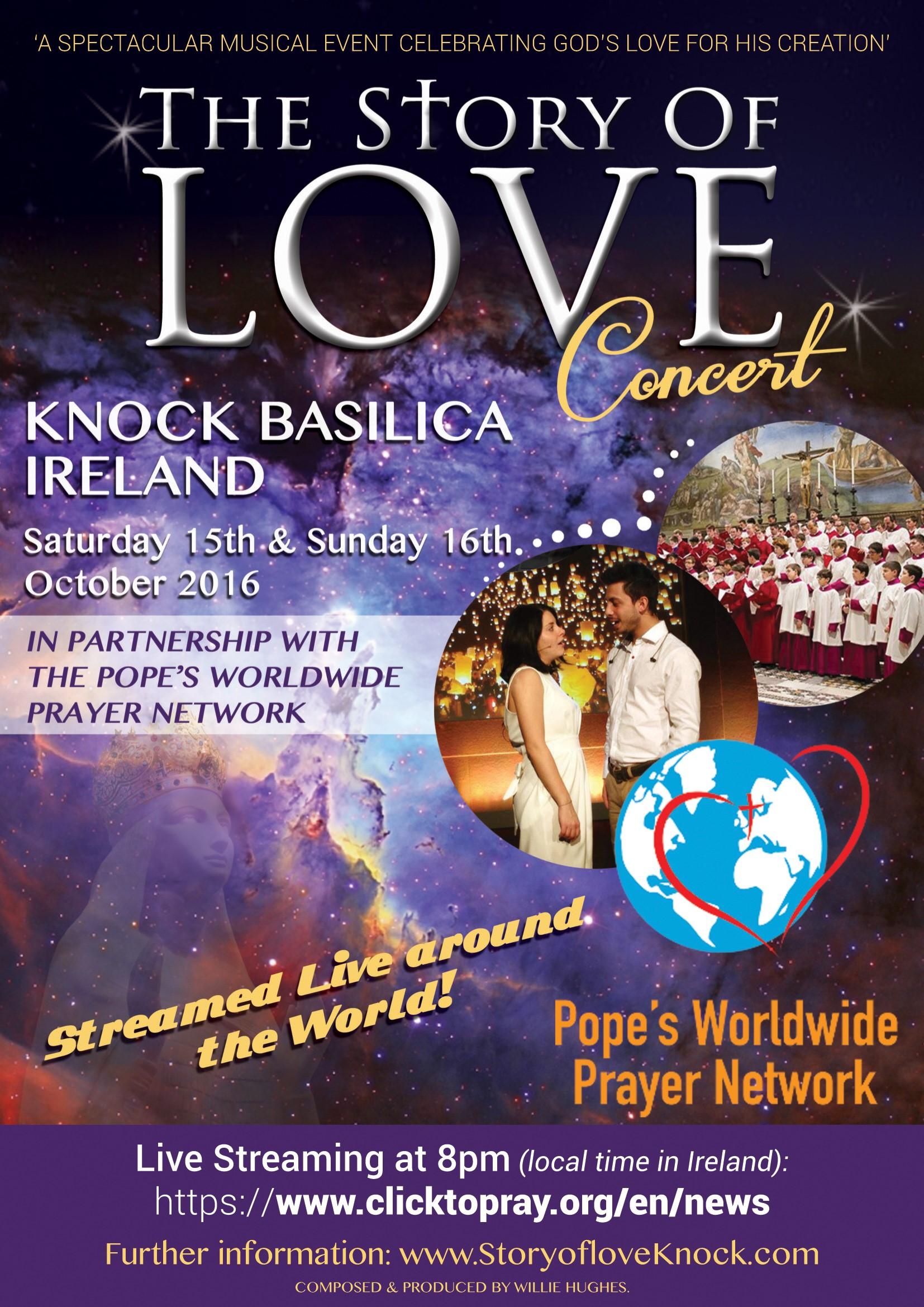 Saturday 15 and Sunday 16 October, 2016 will be a concert called The Story of Love in Ireland, Knock. The Pope’s Worldwide Prayer Network (Apostleship of Prayer) is partner. The story line has been supervised and adapted by a Jesuit, Fr Brian Grogan SJ. The composer and musician, Willie Hughes, has the support of Irish President Michael D. Higgins; Papal Nuncio Archbishop Charles Brown; Archbishop Michael Neary and Bishop Eamonn Walsh.

Knock Shrine in Mayo, where the concert is being held, is a very traditional Catholic site of devotion to Our Lady. The concert starts at the dawn of time – long before the arrival of Christianity but the theme of Divine Love as being the source of all creation is there throughout as is the need to ‘care for our common home’ so beloved of Pope Francis. As you can read in the Press Release, this great concert is also about the challenges of the humanity: “The message is that love for others and for our endangered planet is the key to the wellbeing of the human race.” You find also it here : https://clicktopray.org/en/news/pope-s-worldwide-prayer-network-announces-streaming-of-concert-from-ireland

The Pope Video for the month of October, featuring his prayer intention, will be screened as part of the concert

The concert will also be streamed live on ‘Click to Pray’ : https://www.youtube.com/user/clicktoprayapp and https://clicktopray.org/en/news

The concert has a production team of top Irish professionals including Niamh White, former director of The Late Late Show; Mark Cahill music producer for Liam Lawton; Fiona Cunningham production designer The Voice of Ireland; Luis Peveda, Riverdance. After the performances in Knock Co Mayo, The Story of Love will tour the USA.

“We all know that the world is in a mess, with greed threatening to choke everything. But peoples’ hearts are good. We want to touch them with an experience of global togetherness” says Willie Hughes.

Artists could move the heart of people for the challenges that confront humanity and the mission of the Church, in a universal language, not only for Catholics.

Thank you for your support and prayer,