2014 – Recreation document of the Apostleship of Prayer

Pope Francis approves the process of recreating the Apostleship of Prayer, with the letter from the Assistant Secretary of State, dated 11 July 2014, as described in the document entitled “A journey with Jesus, in apostolic readiness” (officially published in December 2014).
This document states that the Apostleship of Prayer is its Prayer Worldwide Network.
Its prayer intentions are presented as challenges to humanity and the mission of the Church, and offering prayer as a way of making oneself available for mission. 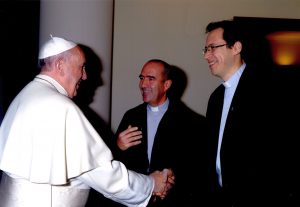