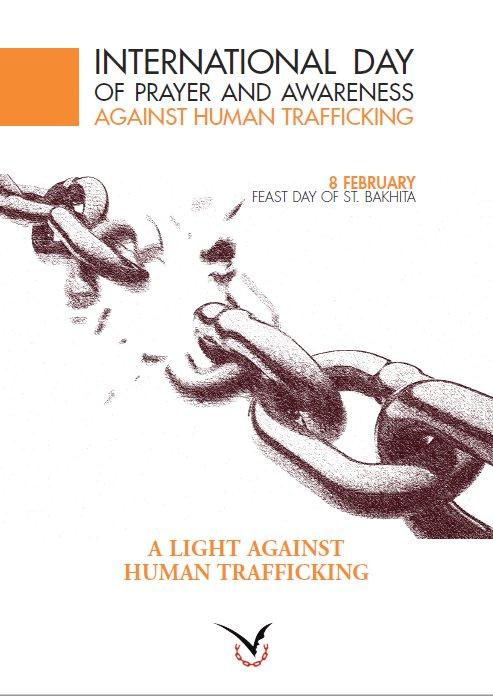 This Wednesday, February 8, the Pope’s Worldwide Prayer Network and the Eucharistic Youth Movement, unite through a great chain of solidarity with many people of different beliefs, together with Churches and NGOs to raise awareness, denounce and pray that human trafficking ends in our world; a crime that afflicts so many people.

Pope Francis strongly denounced this situation: “Human trafficking is a crime against humanity. We must unite our efforts to free the victims and stop this increasingly aggressive crime which threatens not only individuals but the basic values of society and of international security and justice, to say nothing of the economy, and the fabric of the family and our coexistence” (December 12, 2013).

His concern has meant concretizing various actions and initiatives through the Vatican Dicasteries. On February 8, 2015, Saint Josephine Bakhita was remembered, who as a child was kidnapped in Sudan, sold as a slave and transferred to Italy. Francis on that day urged governments to fight the causes of human trafficking, inviting everyone to recognize that it is a global phenomenon that, “exceeds the competence of any community or country, and that to eliminate it we need a similar mobilization in size to the phenomenon itself.”

Today we join millions of people and civil organizations to end this crime. Trafficking in persons is certainly one of the types of slavery of the 21st century. It concerns us and affects us all, nobody can remain indifferent.

Suggestion of sites to visit:

Recalling World Day Against Trafficking, Stresses ‘All Efforts Must Be Made to Eradicate This Shameful and Intolerable Crime’

“Let’s pray to Saint Josephine Bakhita for all migrants and refugees who are exploited and suffer so much.”

Pope Francis said this during his weekly General Audience today, Feb. 8, marking the International Day of Prayer and Awareness Against Human Trafficking, which coincides with the feast day of Saint Josephine Bakhita.

Decrying the phenomenon, Francis appealed: “I urge all those in government position to combat this scourge with firmness, giving voice to our younger brothers and sisters whose dignity has been wounded.”

“All efforts must be made to eradicate this shameful and intolerable crime” he said.

Arriving as a migrant in Europe, Francis applauded how she persevered in the faith and welcome the call she felt to become a religious sister.

Francis expressed his appreciation to all those who, in different ways, help children and adolescents who have been enslaved and abused, be freed from this oppression.