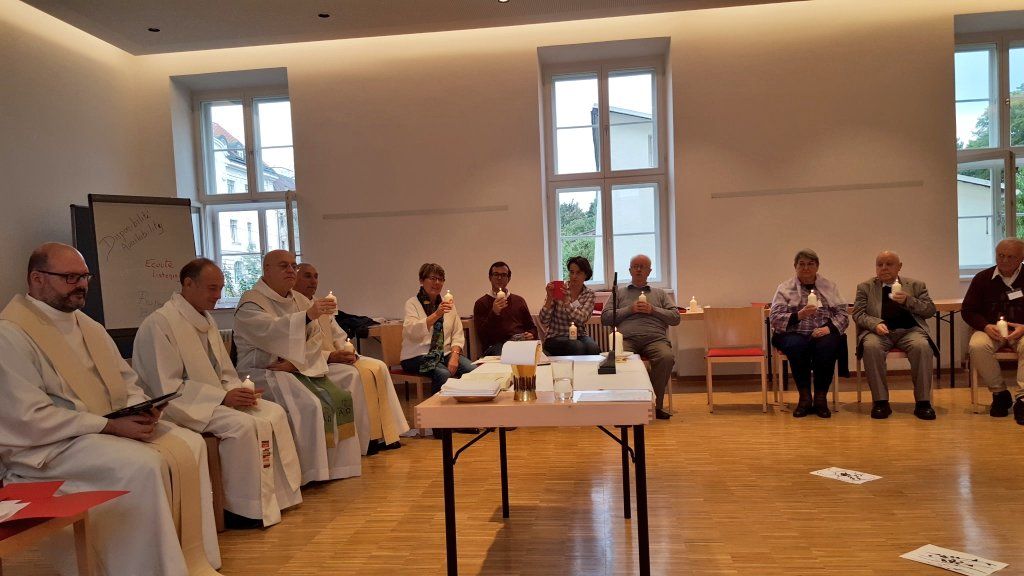 By Jesuits in Ireland

The Pope’s Worldwide Prayer Network is the new name of the Apostleship of Prayer. European representatives met in Vienna from 21-25 September. 29 delegates representing national teams attended the gathering which was facilitated by Fr Frederic Fornos SJ, who was appointed as International Director of the network in July 2016 by Pope Francis.

Fr Frederic outlined the process of recreation of the Apostleship of Prayer as the Pope’s Worldwide Network since 2010. This process included the adoption of a new logo and vision for the network and the creation of digital tools such as The Pope Video, a ninety-second clip in which Pope Francis introduces his monthly intention; and Click to Pray, an app to encourage young people to pray at three moments of the day, that includes challenges to live out the Pope’s monthly intentions. Pope Francis entrusts to the network these intentions, which address the challenges facing humanity and assists the mission of the Church. In January 2017 the Pope specifically asked all Catholics to participate in the network.

The Pope’s intentions “call our attention to the worldwide issues that preoccupy the Pope”, Fr Frederic remarked, explaining that praying with the Pope for his monthly intentions is not meant to be done alone but with others. “It is an outward act, which is connected to the world and opens oneself to the other”, he said. According to Fr. Frederic “prayer is oriented apostolically towards the world”, and in this way it should lead people to encounter others and “get out of the culture of indifference”.

Digital services alone are not sufficient for the recreation of the Apostleship of Prayer, Fr. Frederic asserted, explaining that “we must meet people in the parishes”. Mission to the Parishes is the next step of the recreation process. We need to go out into the world and find the missionary spirit that the Apostleship of Prayer had in the beginning, he said, explaining that the goal of the network is “to help people to be available and ready for the service of the mission of Jesus Christ in their daily lives”, as outlined in ‘A pathway with Jesus in apostolic readiness’ the document approved by Pope Francis in 2014, which describes the re-creation process.