8 January – Angelus – Pope Francis invites you to participate in the Pope’s Worldwide Prayer Network. With the recreation of this ecclesial service, Pope Francis returns to praying with an intention each month, so that it is a monthly orientation for life and mission, maintaining, between months, the alternation between a universal and a missionary prayer intention. 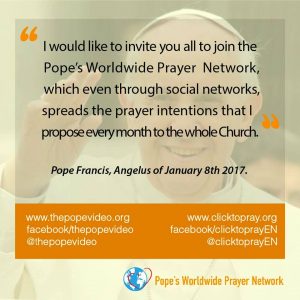 “I would also like to invite you to join in the Pope’s Worldwide Prayer Network, which spreads, also through social networks, the prayer intentions I propose for the Church each month. In this way, the Apostleship of Prayer moves forward and communion grows. In these very cold days, I think of and invite you to think of all of the people who live on the streets, suffering the cold and oftentimes indifference. Unfortunately, some have not survived. We pray for them and we ask the Lord to warm our hearts so that we may be able to help them.”

Read the full text of the Angelus.