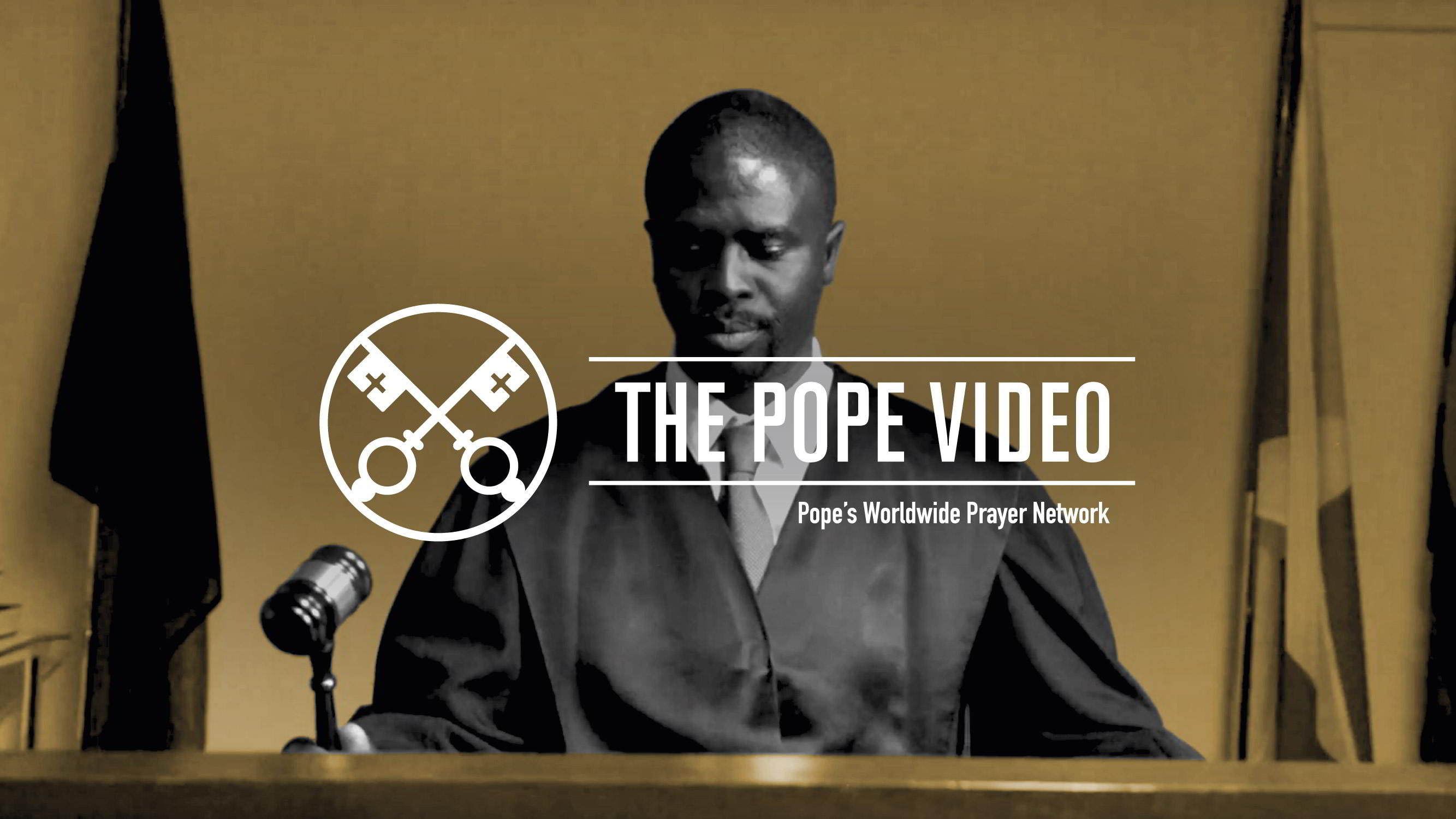 Pope Francis asks us to pray for those who administer justice, that they may work with integrity and respect human dignity

In The Pope Video for July, the Holy Father prays for the people who administer justice in the world, so that injustice may not have the last word.

(Vatican City, July 4, 2019) – In The Pope Video for the month of July, Pope Francis asks all Catholics to pray for the magistrates, judges, and lawyers who administer justice throughout the world, that their work may always be guided by correct intentions and integral criteria. The Pope puts special emphasis on the fact that justice must always be at the service of the human person, respecting human dignity at all times. In addition, he insists that they should follow the example of Jesus, “who never negotiates the truth.”

The malignant phenomenon of corruption of justice is an obstacle to people and nations living together in peace and prosperity. The Pope is concerned about how this creates rifts in the social fabric. According to the United Nations Convention against Corruption (New York, 2004), the integrity of justice is one of the most significant victims of the scourge of corruption. In addition, the corruption of justice impacts most strongly on those who are the poorest, because it foments inequality.

When the social environment is affected by poverty, hunger, and suffering, those whose profession it is to defend and ensure justice become indispensable, working to keep these conditions from creating what Pope Francis called “a breeding ground for illegality.” Only the fundamental value of justice can guarantee the correct functioning of public life.

For the Holy Father, justice cannot be merely a “spare suit,” or a disguise we only wear to go to parties. This is why this July he’s asking us to pray particularly that those responsible for imparting justice may do their job with integrity, without selfish personal interests or hidden agendas, in a framework of transparency and impartiality. In his own words, “The decisions made by judges influence the rights and property of citizens.” This power brings with it great responsibility, especially the duty of maintaining a position that is “safe from favoritism and from pressures that could contaminate the decisions they have to make.”

Fr. Frédéric Fornos, SJ, International Director of the Pope’s Worldwide Prayer Network (which includes the Eucharistic Youth Movement), calls to mind the Pope’s words at the Pan-American Judges’ Summit (June 3-4, 2019) about the asymmetrical and erosive battle which many judges often face: “The defense or prioritization of social rights over other kinds of interests will lead you to confront not only an unjust system, but also a powerful communication system at the service of those in power, that will frequently distort the meaning of your decisions, put in doubt your honesty and probity, and may even subject you to judgment.” “Happy are those who are persecuted for the sake of righteousness, for theirs is the Kingdom of Heaven.” (Mt 5:19)

Fr. Fornos emphasizes that the Holy Father is keeping in mind especially those who have suffered greatly from the times and forms in which justice is done. Regarding the difficult struggles that administrators of justice must sometimes fight in order to judge and discern correctly, Francis asks that they always look through the prism of kindness. He reminds us that “mercy triumphs over judgment” (James 2:13).

The Pope’s special prayer intention is directed towards those who have in their hands the destiny of many people, “because when justice arrives late or doesn’t arrive at all, it creates great pain and suffering.” It is his desire and hope that injustice may never have the last word.