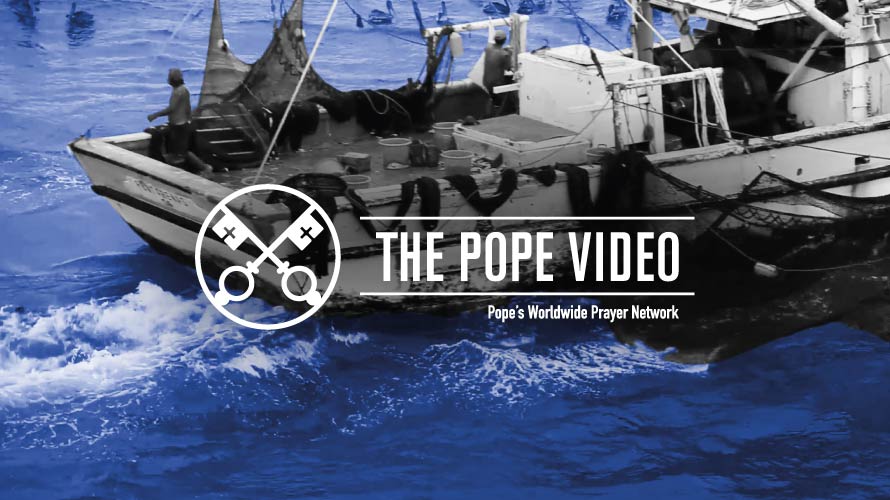 In the 100th anniversary year of the Apostleship of the Sea/Stella Maris, the new “Pope Video” focuses on sailors, fishermen and their families, whose lives are afflicted with many difficulties and challenges.

(Vatican City, August  4 , 2020) – The Pope Video for August was just made public, revealing the prayer intention that the Holy Father is entrusting to the entire Catholic Church through the Pope’s Worldwide Prayer Network (which includes the Eucharistic Youth Movement- EYM). The Holy Father talks specifically about “all those who work and live from the sea” and asks that we pray for them and their families.

In recent years, several reports by international media of communications have revealed the harsh working conditions which exist in the maritime industry. The book Fishers and Plunderers – Theft, Slavery and Violence at Sea (2015) revealed that fishermen and sailors have the most dangerous profession in the world, and are particularly vulnerable to exploitation and abuse. In the worst cases, they are subjected to human trafficking and live in conditions similar to slavery. The European Maritime Safety Agency declared in a report that, between 2011 and 2020, there were 745 work-related fatalities among maritime workers and nearly 9,000 persons injured, among other tragic statistics of this sector.

The concern of the Pope for the challenges that are faced by maritime workers and their families each day range from “abandonment in distant ports” and “forced labour” to “industrial fishing and contamination.” Through impact images provided by the Environmental Justice Foundation (EJF), the video shows the challenges sea workers and their families face every day.  The Holy Father also emphasizes, in the midst of this alarming situation, that “without the people of the sea, many parts of the world would starve.” Indeed, more than three billion people depend on marine and coastal biodiversity for their sustenance, not to mention the fact that the fishing industry employs, directly or indirectly, more than 200 million people.

This video was made in collaboration with the Apostleship of the Sea/Stella Maris, which will be 100 years old in October. This organization promotes pastoral care for the people of the sea and sustains the efforts of the faithful who are called to bear witness with their Christian life in that environment. Fr. Bruno Ciceri, International Director of the Apostleship of the Sea/Stella Maris, within the Dicastery for Promoting Integral Human Development, says, “Since the declaration of the pandemic by the World Health Organization, it’s evident that the life of sailors, fishermen, and their families has been affected significantly. As the situation continues evolving, our chaplains and volunteers are striving to work to support the needs of the people of the sea, and to ensure that they are not mistreated for their service to others while the pandemic lasts.”

Fr. Frédéric Fornos S.J., International Director of the Pope’s Worldwide Prayer Network, said, “We know that people who belong to the maritime world are very vulnerable. This year, their vulnerability comes not only from the adversities specific to their line of work, but also from the difficulties created by the pandemic: being far from their families and not being able to disembark, the fear of contagion and job insecurity during times to come. This is how Pope Francis spoke of it in June, in a video message of gratitude and consolation: ‘I would like to say something to all of you. Know that you are not alone and that you are not forgotten. Your work at sea often keeps you apart from others, but you are close to me in my thoughts and prayers.’ The Pope invites us throughout the month of August to pray—this means, to carry in our hearts and value all the people who work and live on the sea—for all their sacrifices and for their great contribution of food and other kinds of basic needs for the great human family.”

Accompanying the Apostleship of the Sea as it celebrates its 100 years of history, this Pope Video helps us to pray and live the mission that the Pope entrusts to us this month of drawing close to “all those who work and live from the sea, among them sailors, fishermen and their families.”

About the Apostleship of the Sea/Stella Maris

(The Apostleship of the Sea/Stella Maris) is the Catholic Church’s maritime ministry, which reaches more than a million sailors and fishermen throughout the world each year. It was founded in Glasgow, United Kingdom, in 1920 and has an ample worldwide network of more than 1,000 chaplains and volunteers in more than 300 ports. Their mission is to provide sailors and fishermen with spiritual attention, practical support, information, and friendship. For more information, visit: apostleshipofthesea.org.uk