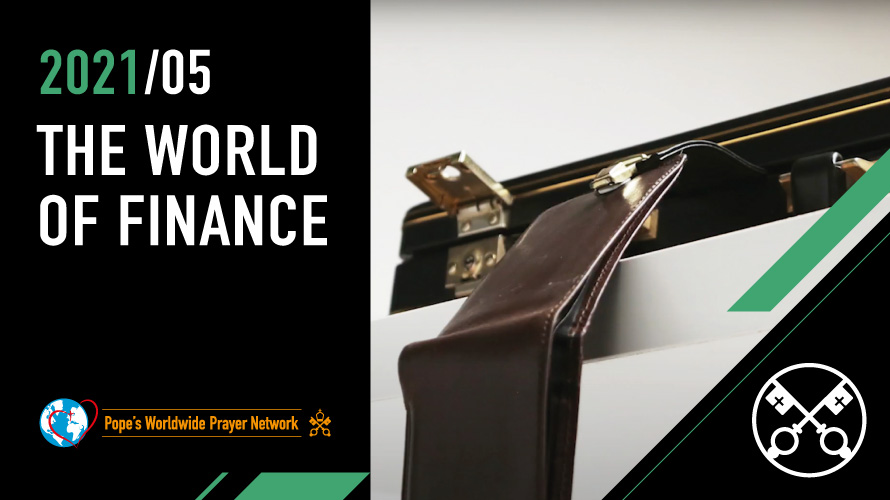 In his prayer intention for May, the Holy Father asks that “finance be an instrument of service, and an instrument to serve people and to take care of the common home” and he prays that those responsible for the world of finance will protect those most in need.

(Vatican City, May 4, 2021) – The Pope Video, which presents the prayer intention that Francis is entrusting to the entire Catholic Church through the Pope’s Worldwide Prayer Network, focuses this May on the world of finance. The Holy Father is concerned by the way that finance, when not regulated, often becomes a mechanism of speculation that excludes people instead of protecting them. This is why, at a moment when many economies are in crisis and so many people are unemployed, he is asking through this intention that we pray “that those in charge of finance will work with governments to regulate the financial sphere and protect citizens from its dangers.” This edition of The Pope Video was created in collaboration with The Dicastery for Promoting Integral Human Development.

A little more than a year after the beginning of the worldwide COVID-19 pandemic, all kinds of global consequences are appearing on the horizon, including economic and financial impacts. The global Gross Domestic Product (GDP), to pick an indicator, suffered in 2020 its sharpest drop since the end of World War II: millions of people have ended up unemployed or furloughed, and governments have injected billions of dollars into their economies to avoid greater damage. Recuperation in 2021 is highly uncertain, and a worrisome inequality is being observed: as the Holy Father highlights in his recent letter to the World Bank and the International Monetary Fund, “many of our brothers and sisters in the human family, especially those at the margins of society, are effectively excluded from the financial world.” This is why, he adds, “It is time to acknowledge that markets – particularly the financial ones – do not govern themselves. Markets need to be underpinned by laws and regulations that ensure they work for the common good, guaranteeing that finance – rather than being merely speculative or self-financing- works for the societal goals so much needed during the present global healthcare emergency.”

Politics not subject to the economy

In Laudato si’, Francis already said that politics and economy should enter into a dialogue in service of life, especially human life (LS, 189). In his message in The Pope Video, he also exclaims, “How far the world of high finance is from the life of the majority of people!” The fear is that this world, dissociated from human reality and favored by the lack of regulations on the part of many governments and monetary policies, will be harmful to the most vulnerable people and will make the poorest pay the consequences. “This situation is unsustainable,” Francis says. “It is dangerous.” In Fratelli Tutti, he already warned against this, denouncing “powerful interests” that can lead to the creation of “a new culture in the service of the elite” in which “the poor always end up the losers.” (FT, 52)

Market freedom and pure speculation cannot solve this kind of problem since they don’t consider the inequalities of the social fabric. This is why it is the responsibility of governments and their financial models to recover “a sound political life that is not subject to the dictates of finance” and to place “human dignity back at the center” to build “the alternative social structures we need.”(FT, 168).

Fr. Fréderic Fornos, S.J., International Director of the Pope’s Worldwide Prayer Network, observed that “this prayer intention must be understood in the context of the crisis we’re living through, which has made evident the great inequality there is in the world.” He called to mind what Pope Francis said in Laudato si’: “Economic powers continue to justify the current global system where priority tends to be given to speculation and the pursuit of financial gain, which fail to take the context into account, let alone the effects on human dignity and the natural environment.” He also referred to the pope’s catecheses on how to emerge from the pandemic, titled “Healing the world,” in which Pope Francis underlined that curing the virus is not enough for us to overcome the pandemic; we must also cure the economic model that is at the base of unjust and unsustainable development. “The Pope said it again recently,” Fr. Fornos continued. “We cannot be content with ‘a return to an unequal and unsustainable model of economic and social life, where a tiny minority of the world’s population owns half of its wealth.’ Why should we pray for this intention proposed by the Pope? Because, as the Pope says, to prepare for the future we must ‘keep our eyes fixed on Jesus’ (Hb 12:2), who saves and heals. Praying in the light of the Gospel helps us to see the world as He does, to live in the manner of the Kingdom of God, so that ‘there is bread for all and more to spare, social organization is based on contributing, sharing and distributing, not on possessing, excluding and accumulating.’”

The Pope Video is an official global initiative the purpose of which is to disseminate the Holy Father’s monthly prayer intentions. It is carried out by the Pope’s Worldwide Prayer Network (Apostleship of Prayer). Since the year 2016, The Pope Video has had more than 154 million views across all its social networks, and is translated into more than 23 languages, receiving press coverage in 114 countries. The project is supported by Vatican Media. More information at: The Pope Video

About The Dicastery for Promoting Integral Human Development

The Dicastery for Promoting Integral Human Development was established by the Holy Father Francis on 17 August 2016. As of 1 January 2017, the competences of the Pontifical Council for Justice and Peace, the Pontifical Council Cor Unum, the Pontifical Council for Pastoral Care of Migrants and Itinerant People, and the Pontifical Council for Health Care Workers have converged in the Dicastery. The Dicastery also includes a specific Migrants and Refugees Section. The Dicastery promotes integral human development in the light of the Gospel and in the wake of the Social Doctrine of the Church, and pays particular attention to issues of social justice, committing itself to the definition of a fairer economic and financial system for all; it deepens and develops the themes of the common good, peace and the safeguarding of creation, as well as disarmament, human rights, health, works of charity, migration and human trafficking, expressing the Pope’s solicitude and attention to suffering and needy humanity. March 2020, Pope Francis established at the Dicastery a Vatican COVID-19 Commission.