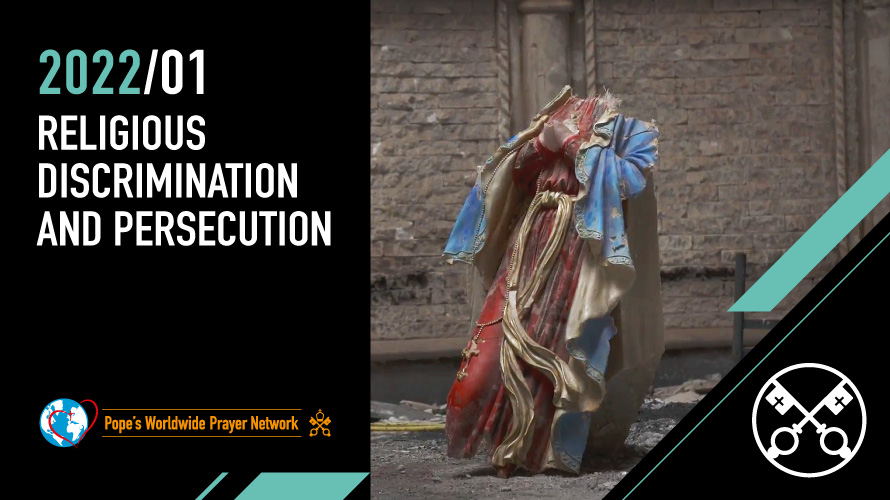 Two out of three people suffer persecution because of their faith: “This is unacceptable!” says Pope Francis

(Vatican City, January 4, 2022) – Pope Video begins its seventh year sharing the prayer intention that Francis entrusts to the entire Catholic Church through the Pope’s Worldwide Prayer Network. The January edition has just been released, with a powerful message in favor of religious freedom and people who suffer discrimination. The Holy Father invites all people to choose “the path of fraternity. Because either we are brothers and sisters, or we all lose.” To achieve this, it is fundamental that we put an end to the numerous restrictions that many people encounter when they profess their faith.

With an appeal to all the governments of the world, the Pope Video—which is supported this month by Aid to the Church in Need (ACN), an international Catholic charity and pontifical foundation, with the mission to help the faithful wherever they are persecuted, oppressed or in need, through information, prayer, and action—emphasizes the idea that, in the societies in which we live and grow, the recognition of the rights and dignity which we all have as persons must flourish.

Francis opens his first prayer intention of 2022 with two direct and incisive questions which cry out for an answer: “How is it possible that many religious minorities currently suffer discrimination or persecution? How can we allow there to be people who are persecuted simply because they publicly profess their faith?” Indeed, according to the Religious Freedom in the World report published by ACN in April of 2021, religious freedom is violated in a third of the countries around the world, in which live close to 5.2 billion people.[1] The same document reports that more than 646 million Christians live in countries where religious freedom is not respected.

Similarly, since 2020, reports have denounced how many ethnic and religious minorities, especially Islamic ones, do not enjoy full rights of citizenship in the countries where they live.[2]

Religious freedom as the foundation of peace

This topic merits attention, as Thomas Heine-Geldern, Executive President of ACN, confirms: “Although it is impossible to know the exact number, our research indicates that two-thirds of the world’s population lives in countries where violations of religious freedom occur in one way or another. Surprising? No, this situation has been growing for centuries from the roots of intolerance, through discrimination, to persecution. We firmly believe that the right to be free to practice or not practice any religion is a fundamental human right that is directly related to the dignity of every individual. It may sound obvious, but even when human rights are on everyone’s lips, religious freedom often leads a shadowy existence. But this right is the starting point for our entire mission. How could we defend the rights of the Christian community if we did not advocate universal law first? Religion is manipulated again and again to spark war. We at ACN are confronted with it every day. Defending the right to religious freedom is key to debunking these conflicts. The religious communities play a central role when ‘nothing works’ politically or diplomatically in war and crisis regions of the world. The world should be aware that the prospects for peaceful coexistence will be bleak unless freedom of religion or belief is respected as a fundamental human right based on the human dignity of every individual.”

The Pope reminds us that religious freedom is tied to the concept of fraternity. In order to begin walking the paths of fraternity upon which Francis has been insisting for years, it’s imperative that we not only respect others, our neighbors, but that we genuinely value them “in their differences and recognize them as true brothers and sisters.” For the Holy Father, “as human beings, we have so many things in common that we can live alongside each other, welcoming our differences with the joy of being brothers and sisters.” Without granting this premise, it is impossible to undertake the path towards peace and living side by side with each other.

Fr. Frédéric Fornos, S.J., International Director of the Pope’s Worldwide Prayer Network, commented on this intention: “Francis has given us a compass with his encyclical Fratelli Tutti: human fraternity. As he also said in his message for the First International Day of Human Fraternity, ‘Today, fraternity is humanity’s new frontier. Either we are brothers and sisters or we destroy each other.’ It is important to recognize what wounds fraternity, so as to heal it and avoid it being translated into religious discrimination and persecution, as so often happens, particularly against Christians. Let us pray for this intention with all our heart: ‘for all those suffering from religious discrimination and persecution; may their own rights and dignity be recognized, which originate from being brothers and sisters in the human family.’”

The Pope Video is an official global initiative with the purpose of disseminating the Holy Father’s monthly prayer intentions. It is carried out by the Pope’s Worldwide Prayer Network (Apostleship of Prayer). Since the year 2016, The Pope Video has had more than 166 million views across all its social networks, and is translated into more than 23 languages, receiving press coverage in 114 countries. The videos are produced and created by the team of The Pope Video of the Prayer Network, coordinated by Andrea Sarubbi, with the support of La Machi Communication for Good Causes agency. The project is supported by Vatican Media. More information at: thepopevideo.org

The Pope’s Worldwide Prayer Network is a Vatican foundation, with the mission of mobilizing Catholics through prayer and action in response to the challenges facing humanity and the mission of the Church. These challenges are presented in the form of prayer intentions entrusted by the Pope to the entire Church. The foundation’s mission is inscribed in the dynamic of the Heart of Jesus, a mission of compassion for the world. It was founded in 1844 as the Apostleship of Prayer. It is present in 89 countries and is made up of more than 22 million Catholics. It includes a youth branch, the EYM: Eucharistic Youth Movement. In December 2020, the Pope constituted this pontifical work as a Vatican foundation and approved its new statutes. Its international director is Fr. Frédéric Fornos, SJ. For more information, visit: popesprayer.va

About Aid to the Church in Need (ACN)

Aid to the Church in Need (ACN), is an international Catholic charity and pontifical foundation, with the mission to help the faithful wherever they are persecuted, oppressed or in need, through information, prayer, and action. From its beginnings, ACN is a work of charity and reconciliation at the service of suffering Christians. ACN is the only international Catholic organization focusing on the pastoral and spiritual support of persecuted and suffering Christians worldwide. They are called to address their need for pastoral care, which so many experience alongside material need. Further to their charitable projects, their work on the status of religious freedom worldwide raises awareness and contributes to the dialogue and action towards change. Through the publication of the Religious Freedom in the World Report, ACN has become recognized as a leader and expert in the field. More information on: https://acninternational.org/

[1] ACN International, 2021 “Religious Freedom in the World.” Available at <https://acninternational.org/religiousfreedomreport/main-findings/>