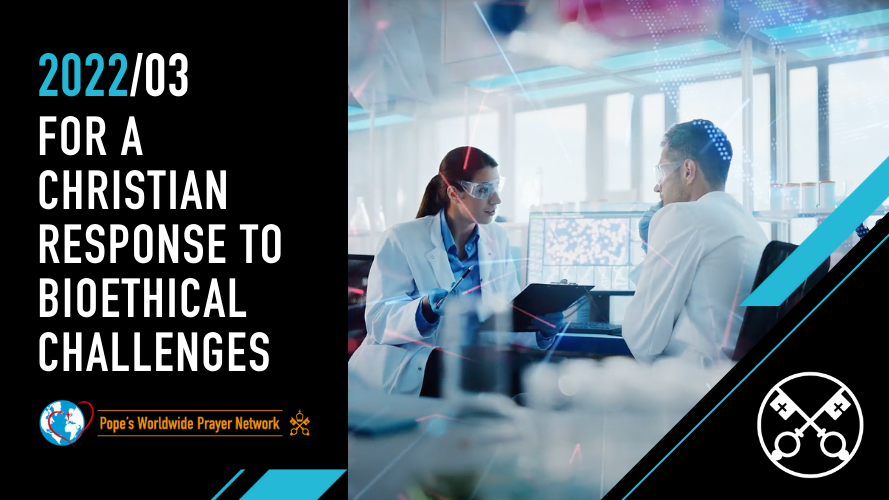 How should we respond to the advances of bioethics? Pope Francis responds with a call to defend life.

(Vatican City, March 8, 2022) – The Pope Video for March has just been released with the prayer intention that Francis is entrusting to the entire Catholic Church through the Pope’s Worldwide Prayer Network. This month, the Holy Father addresses the new challenges that bioethics presents to the world today and, in the light of them, calls us to “continue to defend the dignity of all human life with prayer and action.”  The video has been made with the collaboration of The Pontifical Academy for Life.

How should we think about bioethics from a Christian perspective?

No one can deny the progress that bioethics has shown in recent decades. This relatively new discipline is dedicated, among other things, to orienting and reflecting on problematic situations that include financial, social, ecological, ethical, biomedical, and biotechnological issues. In the prayer intention for March, the Holy Father encourages us not to curb the advances of bioethics nor to hide ourselves from its fields of action and investigation.

There are essentially two risks for Christians that Pope Francis highlights in this video. The first is to see technological progress as an enemy, and therefore, to oppose it in every way and try to “curb” it. The second risk is to suffer it passively, pretending that nothing is happening and ending up “hiding our head like an ostrich” when “respect for human dignity” is put into doubt. There is only one solution: “an even more profound and subtle discernment,” so as to accompany technological progress in its path of service to humanity.

This approach involves a recurring commitment by the Pope to avoid a throw-away culture, as in the example of frozen embryos that are dismissed as “disposable material.” It also means not subordinating bioethical studies and applications to “financial gain,” since “we cannot pay the price of human dignity for progress.”

For this reason, Francis asks Christians to promote the defense of life through prayer—which continues to be the central focus of the intentions proposed each month by the Pontiff and promulgated by the Pope’s Worldwide Prayer Network through The Pope Video and the Click to Pray app—but also through social action. Indeed, Christians have the duty of participating in public debate, making their voice heard with language and arguments that are appropriate and understandable in the current social context—as the Holy Father[1] recently called to mind addressing the Pontifical Academy for Life—but without watering down the contents, and always reiterating the need for integral human development.

Fr. Frédéric Fornos, S.J., International Director of the Pope’s Worldwide Prayer Network, commented on this intention: “Pope Francis always insists on the need for greater discernment regarding the challenges of bioethics, on the need to respect human life and in no way seek one’s own interests following the logic of the market, which knows no limits. These are necessary criteria for discernment which help us to leave behind a throw-away culture and which promote integral respect for human life—the entire extent of human life, from birth to death. Let us pray that, in the face of the new challenges of bioethics, we may always promote the defense of life through prayer and social action.”

The Pope Video is an official global initiative with the purpose of disseminating the Holy Father’s monthly prayer intentions. It is carried out by the Pope’s Worldwide Prayer Network (Apostleship of Prayer). Since the year 2016, The Pope Video has had more than 167 million views across all its social networks, and is translated into more than 23 languages, receiving press coverage in 114 countries. The videos are produced and created by the team of The Pope Video of the Prayer Network, coordinated by Andrea Sarubbi, with the support of La Machi Communication for Good Causes agency. The project is supported by Vatican Media. More information at: The Pope Video

The Pope’s Worldwide Prayer Network is a Vatican foundation, with the mission of mobilizing Catholics through prayer and action in response to the challenges facing humanity and the mission of the Church. These challenges are presented in the form of prayer intentions entrusted by the Pope to the entire Church. The foundation’s mission is inscribed in the dynamic of the Heart of Jesus, a mission of compassion for the world. It was founded in 1844 as the Apostleship of Prayer. It is present in 89 countries and is made up of more than 22 million Catholics. It includes a youth branch, the EYM: Eucharistic Youth Movement. In December 2020, the Pope constituted this pontifical work as a Vatican foundation and approved its new statutes. Its international director is Fr. Frédéric Fornos, SJ. For more information, visit: www.popesprayer.va

[1] Pope Francis, 2021. “Address of His Holiness Pope Francis to participants in the Plenary Assembly of the Pontifical Academy for Life”. Available at: <https://www.vatican.va/content/francesco/en/speeches/2021/september/documents/20210927-assemblea-pav.html>.