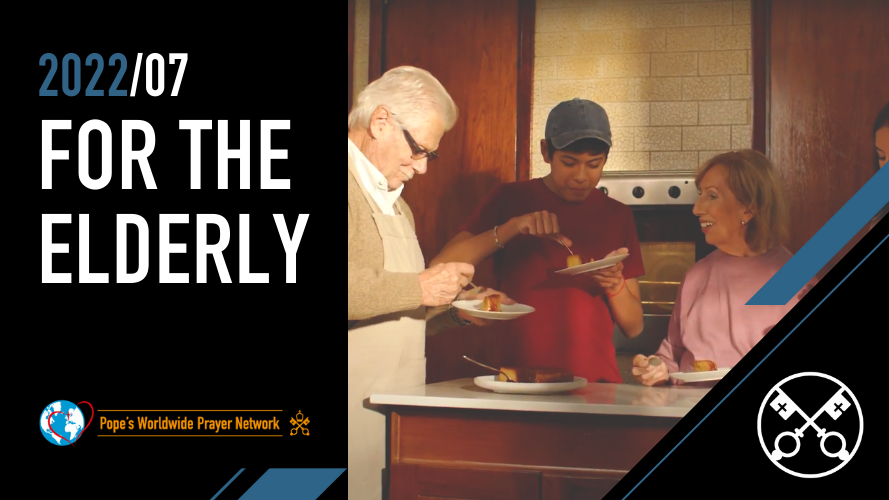 “Teachers of tenderness,” the Pope’s life project for the elderly

(Vatican City, June 30, 2022) – The Pope Video for July has just been released with the prayer intention that Francis is entrusting to the entire Catholic Church through the Pope’s Worldwide Prayer Network. This month, the Holy Father prays “for the elderly, who represent the roots and memory of a people; may their experience and wisdom help young people to look towards the future with hope and responsibility.” This intention coincides with the celebration of the Second World Day for Grandparents and the Elderly, which will be celebrated on Sunday, July 24, in Rome as well as in all the dioceses around the world.

Speaking in the first person about the elderly, Pope Francis says: “There have never been so many of us in the history of humanity, but we don’t quite know how to live this new stage of life.” In recent decades, the number of persons over the age of 65 has grown unceasingly. This phenomenon of population aging particularly affects the most developed countries, where 25% of the elderly live alone. For the elderly, “there are many plans for assistance, but few projects for existence,” the Pope laments in this video, which was made in collaboration with the Dicastery for Laity, Family and Life and the Fondazione Alberto Sordi.

A life mission for the elderly

In the context of a world with many wounds, the Holy Father points to a fundamental role for the elderly generation. “We elderly people often have a special sensitivity for care, for reflection, and affection. We are, or we can become, teachers of tenderness,” the Pope says. “In this world accustomed to war, we need a true revolution of tenderness. We have a great responsibility towards new generations about this.”

Regarding the mission of the elderly in the world and in the Church, Card. Kevin Farrell, Prefect of the Dicastery for Laity, Family and Life, said the following: “The Holy Father invites us to become aware of the relevance of the elderly in the life of society and of our communities, and to do so not sporadically, but structurally, with a regular pastoral outreach. That is to say, it’s not about rushing to deal with an emergency, but laying the foundations for long-term pastoral work that will require our involvement for decades to come. Beyond reaffirming the importance of fighting the throwaway culture, the Pope also seems to want to offer reference points for those who are experiencing the bewilderment of finding themselves getting along in years. For this reason, he has chosen to institute a World Day to be celebrated every year and which will mark the liturgical season: to say that the Church is near to the elderly.”

For his part, Ciro Intino, Director of the Fondazione Alberto Sordi, explains: “Our society is getting older and older, and yet it tends to exclude and isolate elderly people, putting their identity and social role in crisis, especially regarding their relations with younger generations. Unfortunately, there is a lack of adequate responses to elderly people’s care requirements and existential needs. There is still a long road ahead in terms of social and sociomedical policies aimed at senior citizens, with the goal of limiting the condition of isolation which constrains too many elderly people today. The elderly are bearers of wisdom, knowledge, and culture: indispensable values which, through intergenerational dialogue, help ensure a future for our society and for the communities to which they belong. In order for these virtuous dynamics to take place, we need to activate synergies among the networks formed by families, friends, caregivers, and public, private, and charitable institutions. The Fondazione Alberto Sordi promotes these network pathways: offering, in this way, reasons for hope.”

Fr. Frédéric Fornos, S.J., International Director of the Pope’s Worldwide Prayer Network, commented on this intention: “Let us remember our grandparents and the elderly people who have shared their wisdom and their hope with us, gained from their own experience of life and faith. In the Gospels, the elderly Simeon and Anna recognized, in the baby that Mary in Joseph presented in the temple, the hope of an entire people. They are able to see and hear what the great majority, rushing around in their busy lives, do not perceive. As Francis has reminded us in his catecheses on old age over these past three months, the alliance between generations, between the elderly and the young, is a blessing for society. Let us pray this month for this prayer intention of the Pope.”

The Pope Video is an official global initiative with the purpose of disseminating the Holy Father’s monthly prayer intentions. It is carried out by the Pope’s Worldwide Prayer Network (Apostleship of Prayer). Since the year 2016, The Pope Video has had more than 178 million views across all the Vatican’s social networks, and is translated into more than 23 languages, receiving press coverage in 114 countries. The videos are produced and created by the team of The Pope Video of the Prayer Network, coordinated by Andrea Sarubbi, with the support of La Machi Communication for Good Causes agency. The project is supported by Vatican Media. More information at: The Pope Video

About the Dicastery for Laity, Family, and Life

The Dicastery for Laity, Family and Life is responsible for the development of the apostolate of the lay faithful, for the pastoral care of young people, marriage, and the family, and for its mission according to God’s plan, for the elderly, and for the protection and support of human life. For more information: http://www.laityfamilylife.va/. For information about the “Amoris Laetitia Family Year” visit: http://www.amorislaetitia.va

About the Fondazione Alberto Sordi

The Fondazione Alberto Sordi was created in Rome in 1992 under the initiative of Alberto Sordi, who was its first Honorary President. It pursues two main objectives: promoting active aging and protecting the quality of life of the elderly. It carries out activities of general interest in the areas of formation, social and socio-health assistance for the elderly, and applied research through conferences, scientific publications, and personal services. It counteracts the phenomena of social exclusion and abandonment of the elderly. Considering them increasingly necessary and virtuous, it promotes territorial network pathways among third sector entities, private individuals, and public administration, enhancing the contribution of families, their communities, professional workers, and caregivers.