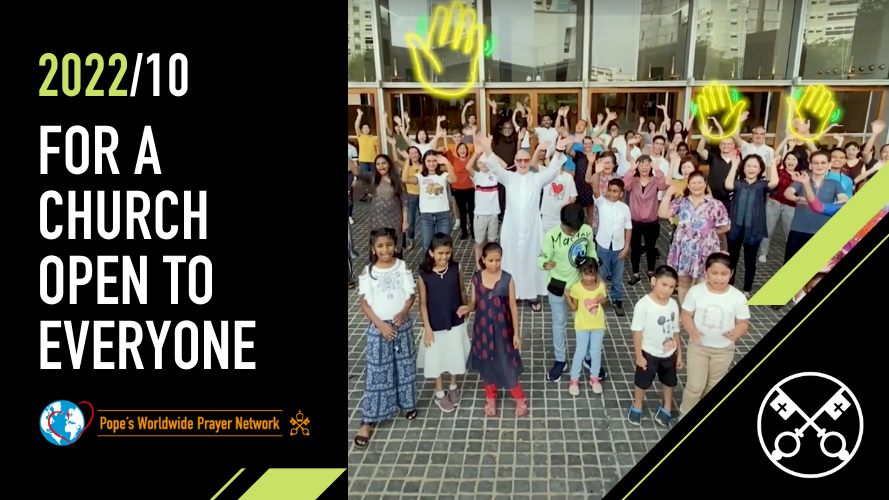 (Vatican City, October 3, 2022) – A new month, a new prayer intention from Pope Francis: the Pope Video for October with the prayer intention that the pontiff is entrusting to the entire Catholic Church through the Pope’s Worldwide Prayer Network has just been released. The intention arrives at a key moment of the synodal process which began in in 2021 and will conclude in 2023. Now that the initial stage has concluded, during which the particular Churches, Episcopal Conferences, and other ecclesial realities reflected on the Preparatory Document sent by Rome, the continental stage is being inaugurated. In this stage, the emphasis falls on listening, discernment, and dialogue on a regional level, based on the contributions received from the particular Churches. The Holy Father highlights the need for a Church that is close to the people and open, and he asks that we pray “that the Church, ever faithful to the Gospel and courageous in preaching it, may live in an increasing atmosphere of synodality and be a community of solidarity, fraternity, and welcome.”

With the support of the General Secretary of the Synod, this edition of The Pope Video points out that for the Church, the Synod “isn’t a poll”: “It’s not about gathering opinions, nor holding a parliament,” but about “listening to each other in our diversity” and above all “listening to the protagonist, the Holy Spirit.” “Doing a synod” is about learning to listen, to talk with others – including those who are outside the Church, at the margin – to seek “closeness, which is God’s style.”

Synodality: the Church of the third millennium

For Pope Francis, walking together in the same direction “is what God expects of the Church of the third millennium: that it regain its awareness of being a people on the road and of having to travel together.”

This is the spirit with which the 2021-2023 Synod “For a Synodal Church: Communion, Participation and Mission” began a year ago, and this month begins its next stage. It is a constant process of listening and discernment throughout the entire world. Now, in the continental stage, based on the work of listening carried out by the particular Churches and on the discernment of the Bishops in the Episcopal Conferences, the General Secretariat for the Synod of Bishops is drafting a Document of Discernment of the People of God after a careful reflection on the fruits of the previous stage.

The General Secretary of the Synod of Bishops, Cardenal Mario Grech, commented about the synodal process: “The response of the People of God in the first stage of the synodal process has been simply extraordinary, unprecedented in history! All the Episcopal Conferences have sent their contribution. It had never happened before. That shows clearly how the Spirit is at work! Today, many of the faithful ask themselves how to continue the journey they have begun. Beyond the activities implemented locally in the field or at the level of individual continents, I invite all to contribute with their personal and community prayer to support those who will be called to exercise listening and discernment in the upcoming continental assemblies.”

It must be understood, based on this, that the current process is not ending with the diocesan stage, nor with the continental stage, nor with the celebration of the Assembly of the Synod of Bishops; these are events that are an integral part of the continuous and sole dynamism of synodal conversion of the Church. And in this mutual listening – as the Holy Father explained in the Commemoration of the 50th Anniversary of the Institution of the Synod of Bishops – “everyone has something to learn. The faithful people, the college of bishops, the Bishop of Rome: all listening to each other, and all listening to the Holy Spirit.”

Open the doors: “Without prayer, there will be no Synod”

Fr. Frédéric Fornos, S.J., International Director of the Pope’s Worldwide Prayer Network, added that Pope Francis has begun a cycle of catecheses on discernment. “It shouldn’t surprise us that in this month, in which we celebrate one year since the beginning of the synodal journey and in which Francis invites us to pray for a Church that is open to everyone, he is helping us understand what it means to discern. For the ongoing synodal journey to be a true spiritual process, it requires listening, dialogue, prayer, and discernment. There is no discernment without prayer. Without prayer we can share nice reflections and experiences, but it will be difficult for us to listen to the Holy Spirit, the protagonist of the Synod. Let us remember, then, as Francis says, that ‘without prayer, there will be no Synod.’”

To pray for the Synodal process and the Pope’s prayer intention: www.prayforthesynod.va/en/ – www.clicktopray.org

The Pope Video is an official global initiative with the purpose of disseminating the Holy Father’s monthly prayer intentions. It is carried out by the Pope’s Worldwide Prayer Network (Apostleship of Prayer). Since the year 2016, The Pope Video has had more than 180 million views across all the Vatican’s social networks, and is translated into more than 23 languages, receiving press coverage in 114 countries. The videos are produced and created by the team of The Pope Video of the Prayer Network, coordinated by Andrea Sarubbi, with the support of La Machi Communication for Good Causes agency. The project is supported by Vatican Media. More information at: The Pope Video