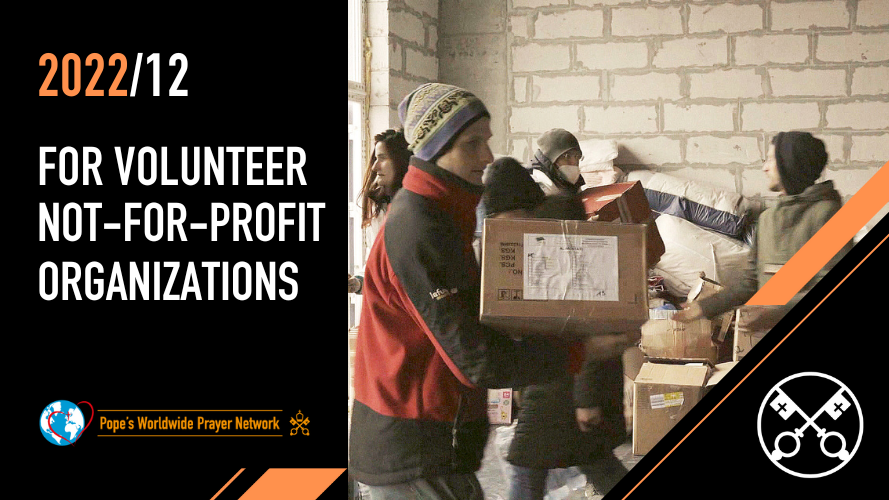 (Vatican City, December 1, 2022) – The 12th edition of the Pope Video for 2022 has just been published with the prayer intention that the Holy Father is entrusting to the entire Catholic Church through the Pope’s Worldwide Prayer Network. To bring the year to a close, Francis brings to the fore volunteer organizations (and all the people who participate in them), which are key agents in society thanks to their commitment to human promotion and to the common good.

In his intention, the Holy Father encourages them to continue their labor, working “not just for the people, but with the people,” being close to them, being “artisans of mercy” and always listening to other people’s needs. Aware of the need to “multiply hope” in communities, he asks us to pray “that volunteer non-profit and human development organizations may find people willing to commit themselves to the common good and ceaselessly seek out new paths of international cooperation.”

Volunteers: the human and Christian face of society

This appeal the Holy Father is making highlights the work of millions of volunteer organizations and associations throughout the world, the majority of which are often without visibility or without recognition as legal entities.

In fact, according to the United Nations Volunteers (UNV) program, 1 out of every 9 people in the world does volunteer work: in total, there are 862.4 million volunteers across all the continents, and adding all the hours of volunteer work would give the equivalent of 109 million full-time workers. However, “the majority of volunteering globally happens informally.” This factor complicates obtaining precise statistics regarding the impact volunteers have on communities.

Many volunteer organizations in the world are of Christian inspiration, and with their work they seek to bear witness to the Gospel in the most difficult situations. From Lebanon to the Philippines, from Mexico to Ukraine, passing through Venezuela and Uganda, The Pope Video this month shows these organizations at the side of victims of natural disasters, of the poor who suffer the consequences of the economic crisis, of malnourished children, of refugees who are fleeing from wars, and of young people and of women who are seeking employment.

“Being a volunteer who helps others is a choice that makes us free,” explains Francis in The Pope Video. “It opens us to other people’s needs —to the demands of justice, to the defense of the poor, to the care of creation.”

Francis doesn’t neglect to share the fundamental aspects that he believes should characterize these organizations, such as being close to others, listening to them, and making the effort to give the best of oneself so as to truly multiply hope in communities that are desperate for general human promotion. In addition, the pontiff holds that a fundamental aspect of volunteering involves changing the focus to work not so much for the people as with the people. This means getting involved with them as equals in search of a common cause. Lastly, the Pope insists on the need for ever greater cooperation in this area: both among different volunteer organizations and between those organizations and States.

Regarding the last prayer intention for 2022, Fr. Frédéric Fornos, S.J., International Director of the Pope’s Worldwide Prayer Network, underlined how Francis insists on volunteer work’s value for society, regardless of whether it is carried out in a way tied to religion or to the government: the key is in selfless commitment (“being open” to your neighbor) and in seeking the common good. He also recalled how, in May of this year, Francis said that “in volunteering, the fundamental dimension of the Christian image of God and man is involved: love of God and love of neighbor,” as Jesus in the Gospels invites us to love God with all our heart and our neighbor as ourselves. In our societies in crisis, volunteers are essential. “The world needs volunteers,” and so Pope Francis invites us to pray “that volunteer non-profit and human development organizations may find people willing to commit themselves to the common good and ceaselessly seek out new paths of international cooperation.”

The Pope Video is an official global initiative with the purpose of disseminating the Holy Father’s monthly prayer intentions. It is carried out by the Pope’s Worldwide Prayer Network (Apostleship of Prayer). Since the year 2016, The Pope Video has had more than 182 million views across all the Vatican’s social networks, and is translated into more than 23 languages, receiving press coverage in 114 countries. The videos are produced and created by the team of The Pope Video of the Prayer Network, coordinated by Andrea Sarubbi, and distributed by the La Machi Communication for Good Causes agency. The project is supported by Vatican Media. More information at: The Pope Video