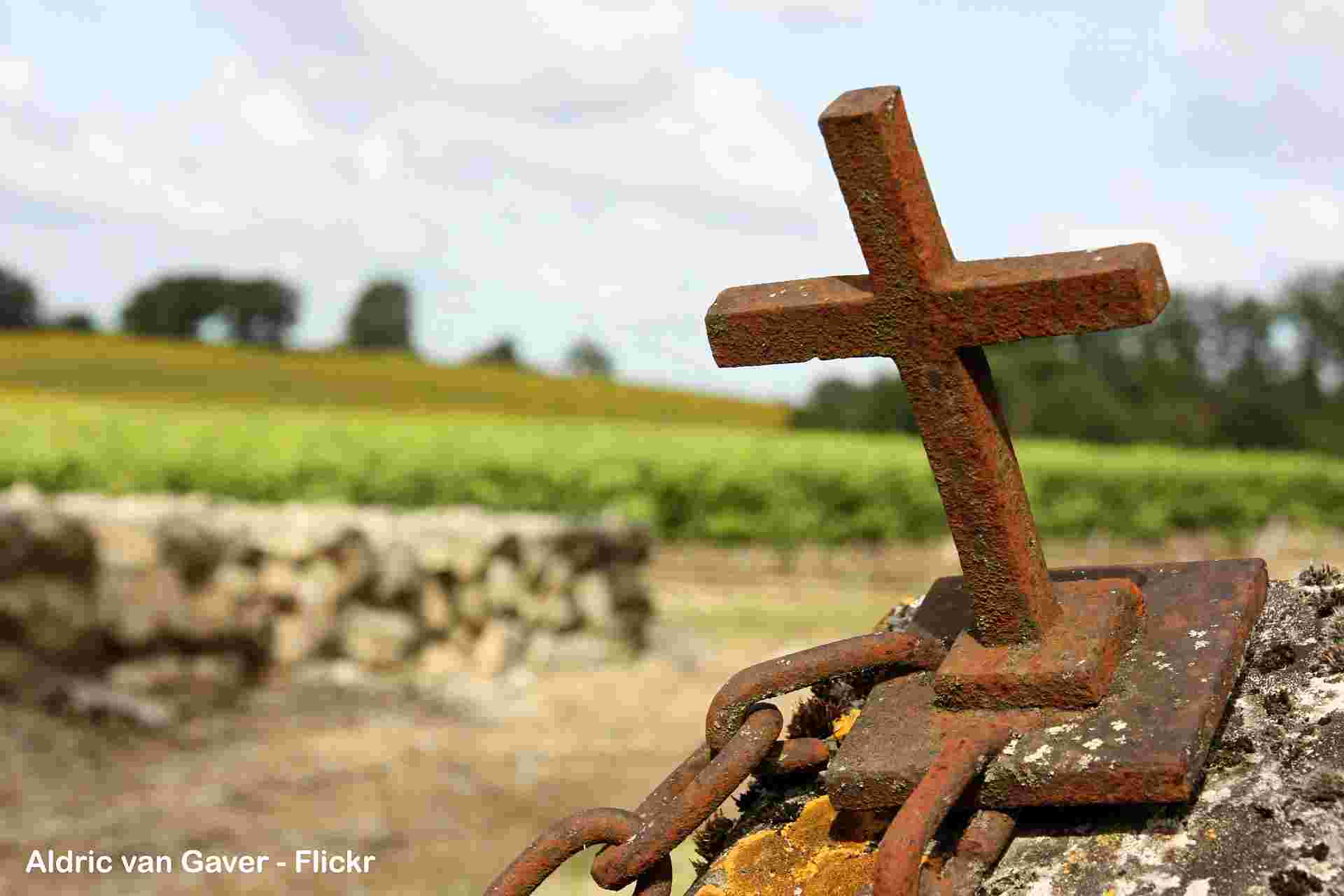 That those Christians who, on account of their faith, are discriminated against or are being persecuted, may remain strong and faithful to the Gospel, thanks to the incessant prayer of the Church.

There are more Christians being martyred and persecuted today than in the early days of the Church. In some countries it is even prohibited to pray together. Pope Francis made this dramatic reality the focus of his meditation on Friday morning, 4 April.

The passage from the Book of Wisdom (Wis 2:1, 12-22) proclaimed during Friday’s liturgy, reveals “what the hearts of the wicked are like, of those who have distanced themselves from God and have made themselves masters, in this case, of religion’”. It also reveals their “attitude toward the prophets”, that they were even willing to persecute them. They are people who are well aware that they are dealing with a just man, explained the Holy Father. So much so that the Scripture describes their thinking in this way: “Let us beset the just one, who is obnoxious to us; he sets himself against our doings”.

To beset, the Pope explained, means “gossiping and slandering among themselves”. Thus, they defame and “prepare the broth to destroy the just man”. Indeed, they cannot accept that there be a just man who, as the Old Testament states, “sets himself against our doings, reproaches us for our transgressions of the law, and charges us with violations of our training.”

These words describe the prophet, who has been persecuted “throughout the course of salvation history”. Jesus himself “said this to the Pharisees”, the Pope recalled, as is narrated in “chapter 23 of the Gospel of St Matthew, which would do us good to read”. Jesus was explicit, “your fathers, he said, killed the prophets but you, in order to ease yourselves of the guilt, to absolve yourselves, you bury the prophets!”.

We have before us, the Holy Father declared, “historical hypocrisy”. It is a fact that “always, throughout salvation history, in the times of Israel as well as in the Church, prophets have been persecuted”. Indeed, a prophet is a man “who says: you are on the wrong path, return to the path of God! This is the message of a prophet”. A message that “does not please the people in power on that wrong path”.

Jesus was persecuted as well. They wanted to kill him, as the Gospel of this liturgy reveals (Jn 7:1-2,10, 25-30). And they certainly “knew what his end would be”. The persecution began immediately, when, “at the start of his preaching he returns to his village, goes to the synagogue and preaches”. Then, “right after great admiration, they begin” murmuring, as the Gospel reveals: “this one, we know where he comes from; the Christ on the other hand, when he comes, no one will know where he came from”. And they all asked themselves: “With what authority do you come to teach us? Where did you study?”.

In a word, it is always the same attitude: “they disqualify the Lord, they disqualify the prophet in order to take away his authority”. It’s as if to say “this one works miracles on Saturday, but you can’t work on Saturday, so he is a sinner! This one eats, goes to lunch with sinners and so he isn’t a man of God!”. In this way they “disqualify Jesus”, because he “left and made others leave that closed religious environment, that box”. And “the prophet fights against putting the Holy Spirit in a box”. Just for this “he is always persecuted”. Prophets “are all persecuted, not included, left aside: they have no place”. And this is a reality that “didn’t end with the death and resurrection of Jesus” but instead “it continued within the Church”.

Indeed, inside the Church there are “those who are persecuted from outside and persecuted from within”. The saints themselves “were persecuted”. In fact, noted the Bishop of Rome, “when we read about the lives of the saints” we find before us many “misunderstandings and persecutions”. Because, being prophets, they said things that were “too harsh”.

In this way “many thinkers in the Church were also persecuted”. On this subject, Pope Francis affirmed: “I’m thinking of someone now, at this moment, not far from us, a man of goodwill, a true prophet, who in his books reproached the Church for falling away from the path of the Lord. He was immediately summoned, his books were placed on the index, they took away his platform, and this is how his life ended, not so long ago. Time passed and today he is a blessed”. But how, one could object, “how can he be a heretic yesterday and a blessed today? Yes, “yesterday, those in power wanted to silence him because they didn’t like what he had to say. Today, the Church who, thanks be to God, knows how to repent, says: no, this man is good! Even more, he is on the road to sainthood: he is a blessed”.

History testifies then that “all the persons that the Holy Spirit chooses to speak the truth to the people of God suffer persecution”. And here the Pope recalled “the last of the Beatitudes of Jesus: blessed are you when you are persecuted in my name”. It’s that “Jesus is really the model, the icon: the Lord suffered a great deal, he was persecuted”; and in so doing “he took on all of the persecutions of his people”.

But “even today, Christians are persecuted”, the Pope told us. Such that “I dare say — he confirmed — that perhaps there are as many or more martyrs now than in those early days”. And they are persecuted “because in this worldly society, this easy-going society that want no problems, they speak the truth and proclaim Jesus Christ”. Truly “today there is a great deal of persecution”.

Really, today, in some places, “it’s the death penalty, it’s prison for having the Gospel in one’s home, for teaching the Catechism” the Holy Father emphasized. He then confided: “A Catholic from one of these Countries told me that they cannot pray together — it’s forbidden! They can only pray alone and in hiding.” If they want to celebrate the Eucharist, they organize “a birthday party, they pretend to celebrate a birthday and there they celebrate the Eucharist before the party”. And if, as “has happened, they see the police coming, they immediately hide everything and go on with the party”, they hide behind “cheer and good wishes”. When these agents “have left, they finish celebrating the Eucharist”. And this is what “they have to do because it is forbidden to pray together”.

In deed, Pope Francis remarked, “this history of persecution, of misunderstanding” has continued “from the time of the prophets to this day”. This is also “the path of the Lord, the path of those who follow the Lord”. It is a path that “always ends like the Lord’s, with a resurrection, but passing by way of the cross”. The Pope therefore recommended “to never be afraid of persecution, of misunderstandings”, even if because of them “many things are lost”.

For the Christians, “there will always be persecution, misunderstanding”. But they have with them to face it the certainty that “Jesus is Lord and this is the challenge and the cross of our faith”. Thus, the Holy Father recommended, “when this happens, in our community or in our heart, let us look to the Lord and think” of this passage from the book of Wisdom that speaks of how the wicked beset the just. He concluded asking the Lord for “the grace to go forward on his path and, if it happens, with the cross of persecution as well”.

Today is still the time of martyrs: Christians are persecuted in the Middle East where they are forced to flee, even handled “in an elegant manner, with white gloves”. On the day in which the Church commemorates the martyrs of the first centuries, Pope Francis encouraged prayer “for our brothers and sisters who live in persecution today”. Because, he stated, today “there are no fewer martyrs” than in Nero’s time.

The Holy Father referred to the opening prayer of the day’s Mass, in which the Lord was asked, “O God, who consecrated the abundant first fruits of the Roman Church by the blood of the Martyrs”. This is an appropriate invocation, he explained, for the commemoration of “the first martyrs of this Church”. What’s more, he added, “their bones are so close”, referring to the catacombs in Rome.

It is especially meaningful, the Pope noted, that we invoke the Lord, asking him to make fruitful the seeds: he made the first fruits abundant. Thus, the prayer “speaks of growth and of a plant: this makes us think of the many times that Jesus said that the Kingdom of Heaven is like a seed”. And the Apostle Peter also tells us in his letter that “we have been born anew by an imperishable seed”. And this “is the seed of the word of God. This is what gets planted: the seed is the word of God, says the Lord. It gets planted”.

Jesus explains in a parable that the Kingdom of Heaven is just “like a man who has sown the seed, then goes home, relaxes, works, keeps watch by night and by day, and the seed grows, it sprouts, without his knowing how”.

First of all, the Pope explained, “we know that there’s no growth without the Spirit: it’s he who builds the Church, it’s he who makes the Church grow, it’s he who summons the community of the Church”. However, he continued, “Christian witness is also necessary”. And “when the testimony is finished, when historical circumstances call for strong witness, there are martyrs: the greatest witnesses!”. And it is here that the “Church is watered by the blood of martyrs”. This is truly “the beauty of martyrdom: it begins with testimony day by day, and may end with blood, like Jesus, the first martyr, the first witness, the faithful witness”.

However, to be true, the testimony “must be unconditional” the Pontiff declared. The Gospel reading of the day’s liturgy (Mt 8:18-22) is clear on this point. “We heard what the Lord said”, when a disciple asked for a condition in order to follow him: “Lord, let me first go and bury my father”. But “the Lord stopped him: ‘No’!”. In fact, the Pope indicated, “testimony is unconditional, it must be firm, it must be decisive, it must have that language, so powerful, of Jesus: ‘yes yes, no no’!”. And this is precisely “the language of testimony”.

To the present day, the Pope repeated, “there are more witnesses, more martyrs in the Church than in the first centuries”. And “commemorating our glorious ancestors in the Mass here in Rome”, he called for thoughts and prayer also for “our brothers and sisters who live in persecution, who suffer and whose blood causes the seeds of many tiny Churches to grow”. Yes, he concluded, “let us pray for them and for us as well”.