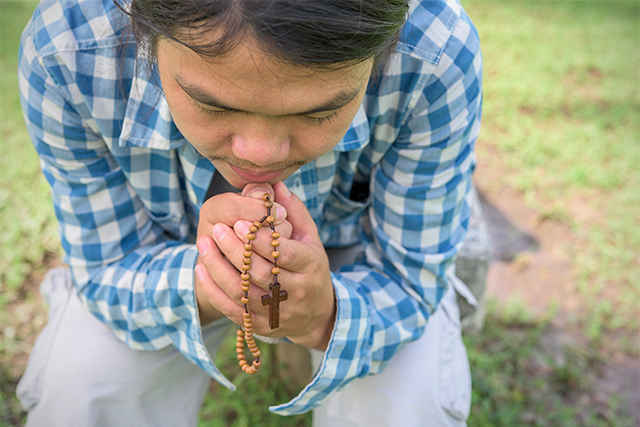 That Christians, and other religious minorities in Asian countries, may be able to practise their faith in full freedom.

[…] Saint Joseph Vaz continues to be an example and a teacher for many reasons, but I would like to focus on three. First, he was an exemplary priest. Here today with us are many priests and religious, both men and women, who, like Joseph Vaz, are consecrated to the service of God and neighbour. I encourage each of you to look to Saint Joseph as a sure guide. He teaches us how to go out to the peripheries, to make Jesus Christ everywhere known and loved. He is also an example of patient suffering in the cause of the Gospel, of obedience to our superiors, of loving care for the Church of God (cf. Acts 20:28). Like ourselves, Saint Joseph Vaz lived in a period of rapid and profound transformation; Catholics were a minority, and often divided within; there was occasional hostility, even persecution, from without. And yet, because he was constantly united with the crucified Lord in prayer, he could become for all people a living icon of God’s mercy and reconciling love.

Second, Saint Joseph shows us the importance of transcending religious divisions in the service of peace. His undivided love for God opened him to love for his neighbour; he ministered to those in need, whoever and wherever they were. His example continues to inspire the Church in Sri Lanka today. She gladly and generously serves all members of society. She makes no distinction of race, creed, tribe, status or religion in the service she provides through her schools, hospitals, clinics, and many other charitable works. All she asks in return is the freedom to carry out this mission. Religious freedom is a fundamental human right. Each individual must be free, alone or in association with others, to seek the truth, and to openly express his or her religious convictions, free from intimidation and external compulsion. As the life of Saint Joseph Vaz teaches us, genuine worship of God bears fruit not in discrimination, hatred and violence, but in respect for the sacredness of life, respect for the dignity and freedom of others, and loving commitment to the welfare of all.

Finally, Saint Joseph gives us an example of missionary zeal. Though he came to Ceylon to minister to the Catholic community, in his evangelical charity he reached out to everyone. Leaving behind his home, his family, the comfort of his familiar surroundings, he responded to the call to go forth, to speak of Christ wherever he was led. Saint Joseph knew how to offer the truth and the beauty of the Gospel in a multi-religious context, with respect, dedication, perseverance and humility. This is also the way for the followers of Jesus today. We are called to go forth with the same zeal, the same courage, of Saint Joseph, but also with his sensitivity, his reverence for others, his desire to share with them that word of grace (cf. Acts 20:32) which has the power to build them up. We are called to be missionary disciples.

Dear brothers and sisters, I pray that, following the example of Saint Joseph Vaz, the Christians of this country may be confirmed in faith and make an ever greater contribution to peace, justice and reconciliation in Sri Lankan society. This is what Christ asks of you. This is what Saint Joseph teaches you. This is what the Church needs of you. I commend all of you to the prayers of our new saint, so that, in union with the Church throughout the world, you may sing a new song to the Lord and declare his glory to all the ends of the earth. For great is the Lord, and greatly to be praised (cf. Ps 96: 1-4)! Amen.