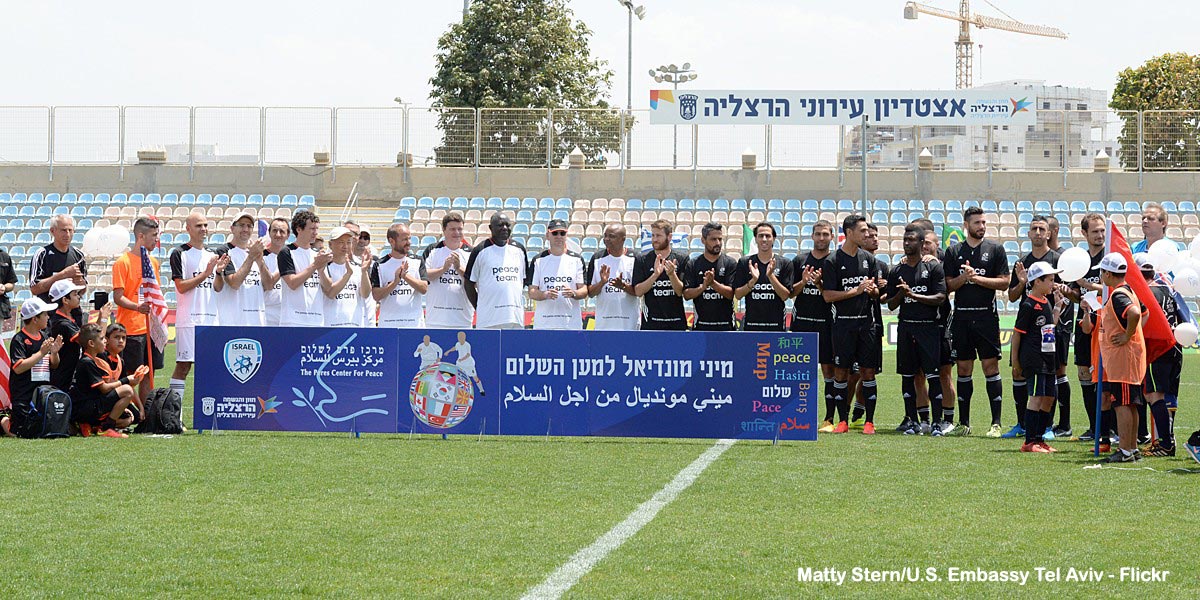 That sports may be an opportunity for friendly encounters between peoples and may contribute to peace in the world.

I am delighted to meet with you on the occasion of the Interreligious Match for Peace in which you will play tonight at Rome’s Olympic Stadium. I thank you for readily fulfilling my wish to see champions and coaches from various countries and religions compete in a sporting event to bear witness to the feelings of brotherhood and friendship. My special thanks go to the people and organizations that have contributed to the realization of this event. I am thinking especially of “Scholas Occurrentes” which is part of the Pontifical Academy of Sciences, and the “PUPI Foundation”.
The game this evening will certainly be an opportunity to raise funds in support of solidarity projects, but it will be above all an opportunity to reflect on the universal values that football and sports in general can foster: loyalty, sharing, acceptance, dialogue, trust in others. These are values common to every person regardless of race, culture and religious creed. Indeed, tonight’s sporting event is a highly symbolic gesture to help one understand that it is possible to build a culture of encounter and a world of peace, where believers of different religions, while preserving their own identity — for when I said “regardless” this did not mean “setting aside”, no. Believers of different religions, while preserving their own identity, can coexist in harmony and mutual respect.
We all know that sport, especially football, is a human and social phenomenon of great importance, one that has an impact on contemporary customs and mindsets. People, especially young people, look to you with admiration for your athletic abilities. It is important to set a good example both on and off the field. In sports competitions you are called to demonstrate that sport which expresses the joy of life, of games, is a celebration, and as such it must be appreciated through the recovery of its gratuitousness, its capacity to foster the bonds of friendship and strengthen openness between people. Also with your daily behaviour, full of faith and spirituality, humanity and altruism, you can render testimony to the ideals of peaceful civil and social coexistence, for the edification of a civilization founded on love, on solidarity and on peace. And this is the culture of encounter: working for this.
May the football match tonight revive in those who are taking part the awareness of the need to commit oneself so that sports may contribute effectively and fruitfully to the peaceful coexistence of all peoples, excluding any discrimination of race, language and religion. You know that discrimination can be synonymous with scorn. Discrimination is a form of scorn, and you, with this game tonight, will say ‘no’ to every kind of discrimination. Religions in particular are called to be vehicles of peace and never hatred, for in the name of God one needs to bear love, always and only. Religion and sports, understood in this authentic way, can work together and offer to all of society eloquent signs of the new era in which “nation shall not lift up sword against nation” (cf. Is 2:4).
On such a unique and meaningful occasion as this match tonight, I want to deliver this message to all of you: expand your hearts as brothers to brothers! This is one of the secrets of life: to expand our hearts as brothers to brothers, and that is also the deepest and most authentic aspect of sports.

[…] For 100 years the Italian National Olympic Committee has promoted, organized, led sport in Italy, not only with regard to great world events such as the Olympics, but also by enhancing its popular, social, educational and cultural aspects. It does so by drawing inspiration from the fundamental principles of the Olympic Charter, which, among its main principles, poses the centrality of the person, the harmonious development of humankind, the defense of human dignity, and also that of contributing “to building a peaceful and better world, without war or tension, by educating youth through sport practised without discrimination of any kind… with a spirit of friendship, solidarity and fair play (International Olympic Committee, Olympic Charter, n. 6).
Sport has always favoured universality characterized by fraternity and friendship among peoples, understanding and peace among nations, out of respect, tolerance, harmony of differences. Every sporting event, especially those of the Olympics, where representatives of nations with histories, cultures, traditions, faiths and different values meet, can become a channel of an ideal force capable of opening new and sometimes unexpected paths in the resolution of conflicts arising from human rights violations.
The Olympic motto — “Citius, altius, fortius” — is not an incitement to the supremacy of one nation over another, of one people over another, or even of the exclusion of the weakest and least protected. But it represents the challenge to which we are all called, not only the athletes: that of taking on the toil, the sacrifice, to reach life’s important goals, accepting one’s limitations without allowing oneself to be impeded by them but striving to excel.
I invite you to persevere on this path. I encourage the educational work you are doing in schools, as well as that in the world of work, and that of solidarity, in order to foster sport accessible to all, attentive to the weakest and the most vulnerable strata of society; sport inclusive of people with varying disabilities, of foreigners, of those who live on the outskirts and who need places to meet, socialize, share and play; sport not aimed at profit but at development of the human person, in a open manner.
I know that the CONI, first, increasingly imitated by other National Committees, has welcomed the position of Olympic Chaplain into its organization. It is a friendly presence who seeks to make manifest the closeness of the Church as well as to stimulate a strong sense of spiritual competitiveness in sport enthusiasts. There are indeed several words in the vernacular of sport which refer to spiritual life. This was even understood by the Saints who knew how to explain passion, enthusiasm, perseverance, determination, challenge and limitation with the gaze projected toward the other, beyond oneself toward the horizon of God. St Paul invites us to train “in godliness;… for while bodily training is of some value, godliness is of value in every way, as it holds promise for the present life and also for the life to come” (1 Tim 4:8). […]