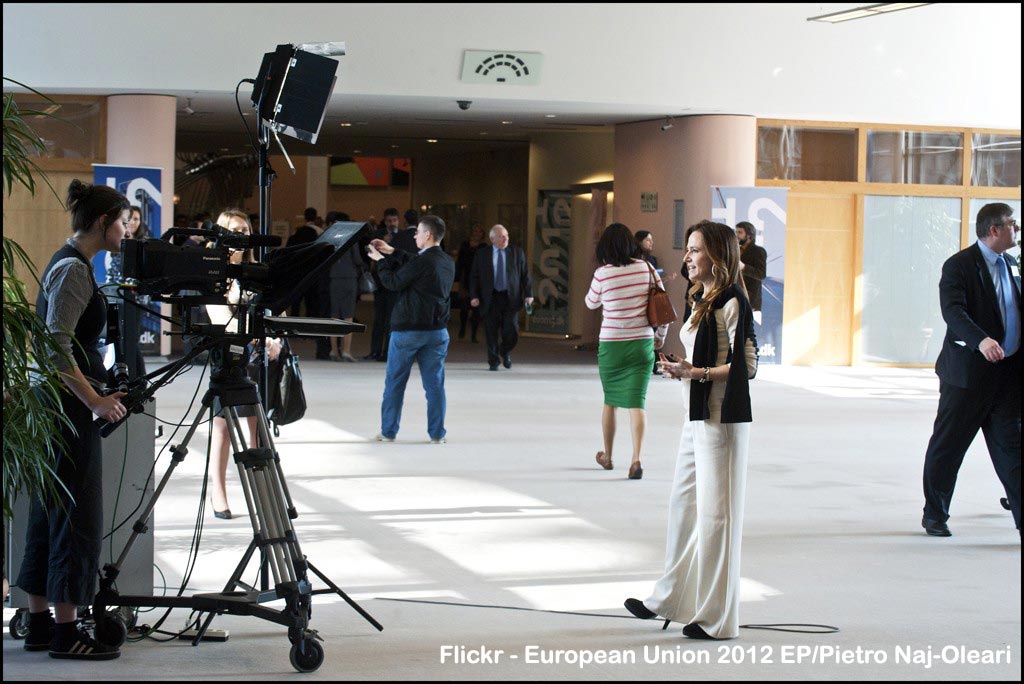 That journalists, in carrying out their work, may always be motivated by respect for truth and a strong sense of ethics.

[…] The role of the mass media has expanded immensely in these years, so much so that they are an essential means of informing the world about the events of contemporary history. I would like, then, to thank you in a special way for the professional coverage which you provided during these days – you really worked, didn’t you? – when the eyes of the whole world, and not just those of Catholics, were turned to the Eternal City and particularly to this place which has as its heart the tomb of Saint Peter. Over the past few weeks, you have had to provide information about the Holy See and about the Church, her rituals and traditions, her faith and above all the role of the Pope and his ministry.

I am particularly grateful to those who viewed and presented these events of the Church’s history in a way which was sensitive to the right context in which they need to be read, namely that of faith. Historical events almost always demand a nuanced interpretation which at times can also take into account the dimension of faith. Ecclesial events are certainly no more intricate than political or economic events! But they do have one particular underlying feature: they follow a pattern which does not readily correspond to the “worldly” categories which we are accustomed to use, and so it is not easy to interpret and communicate them to a wider and more varied public. The Church is certainly a human and historical institution with all that that entails, yet her nature is not essentially political but spiritual: the Church is the People of God, the Holy People of God making its way to encounter Jesus Christ. Only from this perspective can a satisfactory account be given of the Church’s life and activity.

Christ is the Church’s Pastor, but his presence in history passes through the freedom of human beings; from their midst one is chosen to serve as his Vicar, the Successor of the Apostle Peter. Yet Christ remains the centre, not the Successor of Peter: Christ, Christ is the centre. Christ is the fundamental point of reference, the heart of the Church. Without him, Peter and the Church would not exist or have reason to exist. As Benedict XVI frequently reminded us, Christ is present in Church and guides her. In everything that has occurred, the principal agent has been, in the final analysis, the Holy Spirit. He prompted the decision of Benedict XVI for the good of the Church; he guided the Cardinals in prayer and in the election.

It is important, dear friends, to take into due account this way of looking at things, this hermeneutic, in order to bring into proper focus what really happened in these days.

All of this leads me to thank you once more for your work in these particularly demanding days, but also to ask you to try to understand more fully the true nature of the Church, as well as her journey in this world, with her virtues and her sins, and to know the spiritual concerns which guide her and are the most genuine way to understand her. Be assured that the Church, for her part, highly esteems your important work. At your disposal you have the means to hear and to give voice to people’s expectations and demands, and to provide for an analysis and interpretation of current events. Your work calls for careful preparation, sensitivity and experience, like so many other professions, but it also demands a particular concern for what is true, good and beautiful. This is something which we have in common, since the Church exists to communicate precisely this: Truth, Goodness and Beauty “in person”. It should be apparent that all of us are called not to communicate ourselves, but this existential triad made up of truth, beauty and goodness. […]

«The role of the mass media»

2. Thus — and this is the second point that I would like to underline — in presenting events your outlook cannot be “worldly” but ecclesial. We live in a world where almost nothing exists which does not pertain to the universe of the media. Increasingly sophisticated instruments only reinforce the increasingly pervasive role played by technology, the forms and languages of communication in the unfolding of daily life, and this is not only in the world of the youth. As I recalled the day after my election as Bishop of Rome, while meeting representatives of the social media in Rome for the Conclave, “the role of the mass media has expanded immensely in these years, so much so that they are an essential means of informing the world about the events of contemporary history”. All of this is reflected in the life of the Church as well. But, if it is no simple task to relate the events of history, it is even more complex to relate events connected to the Church, which is the “sign and instrument of intimate union with God”, the Body of Christ, the People of God, the Temple of the Holy Spirit. This requires a special kind of responsibility, a strong capacity to read reality in a spiritual light. Indeed, the events of the Church “have one particular underlying feature: they follow a pattern which does not readily correspond to the ‘worldly’ categories which we are accustomed to use, and so it is not easy to interpret and communicate them to a wider and more varied public” (Address to the representatives of the media, 16 March 2013). Speaking of responsibility, a respectful vision of the events one wants to relate, means also awareness of the fact that the selection, organization, the broadcasting and sharing of content requires special attention because the instruments used are neither neutral nor transparent. Today this awareness permeates the CTV, engaged in a reorganization according to the technological paradigms that can better serve all the world’s latitudes, and contributes to the breath of catholicity of the Church. I would like to thank you, Msgr Dario Edoardo Viganò, from my heart and all the staff of CTV, for your ability to create relationships with the different realities around the world, to build bridges, overcoming walls and ditches, and to bring the light of the Gospel. All in accordance with the indication of Inter Mirifica which states how in the media world too, effective apostolic action requires “unity of planning and resources” (n. 21). To converge rather than compete should be the strategy of media initiatives in the Catholic world.