Universal: Centrality of the Human Person 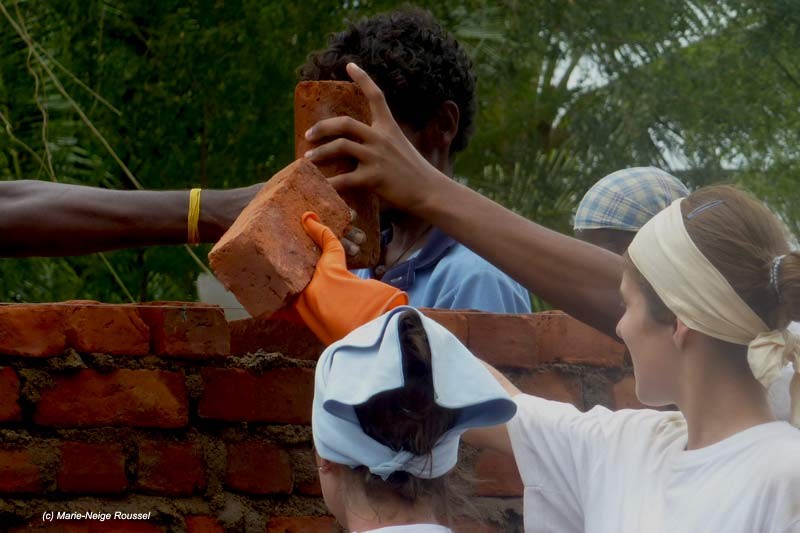 That each may contribute to the common good and to the building of a society that places the human person at the center.

[…] Today, the promotion of human rights is central to the commitment of the European Union to advance the dignity of the person, both within the Union and in its relations with other countries. This is an important and praiseworthy commitment, since there are still too many situations in which human beings are treated as objects whose conception, configuration and utility can be programmed, and who can then be discarded when no longer useful, due to weakness, illness or old age.

In the end, what kind of dignity is there without the possibility of freely expressing one’s thought or professing one’s religious faith? What dignity can there be without a clear juridical framework which limits the rule of force and enables the rule of law to prevail over the power of tyranny? What dignity can men and women ever enjoy if they are subjected to all types of discrimination? What dignity can a person ever hope to find when he or she lacks food and the bare essentials for survival and, worse yet, when they lack the work which confers dignity?

Promoting the dignity of the person means recognizing that he or she possesses inalienable rights which no one may take away arbitrarily, much less for the sake of economic interests.
At the same time, however, care must be taken not to fall into certain errors which can arise from a misunderstanding of the concept of human rights and from its misuse. Today there is a tendency to claim ever broader individual rights – I am tempted to say individualistic; underlying this is a conception of the human person as detached from all social and anthropological contexts, as if the person were a “monad” (μονάς), increasingly unconcerned with other surrounding “monads”. The equally essential and complementary concept of duty no longer seems to be linked to such a concept of rights. As a result, the rights of the individual are upheld, without regard for the fact that each human being is part of a social context wherein his or her rights and duties are bound up with those of others and with the common good of society itself.

I believe, therefore, that it is vital to develop a culture of human rights which wisely links the individual, or better, the personal aspect, to that of the common good, of the “all of us” made up of individuals, families and intermediate groups who together constitute society.[3] In fact, unless the rights of each individual are harmoniously ordered to the greater good, those rights will end up being considered limitless and consequently will become a source of conflicts and violence.
To speak of transcendent human dignity thus means appealing to human nature, to our innate capacity to distinguish good from evil, to that “compass” deep within our hearts, which God has impressed upon all creation.[4] Above all, it means regarding human beings not as absolutes, but as beings in relation. In my view, one of the most common diseases in Europe today is the loneliness typical of those who have no connection with others. This is especially true of the elderly, who are often abandoned to their fate, and also in the young who lack clear points of reference and opportunities for the future. It is also seen in the many poor who dwell in our cities and in the disorientation of immigrants who came here seeking a better future.

This loneliness has become more acute as a result of the economic crisis, whose effects continue to have tragic consequences for the life of society. In recent years, as the European Union has expanded, there has been growing mistrust on the part of citizens towards institutions considered to be aloof, engaged in laying down rules perceived as insensitive to individual peoples, if not downright harmful. In many quarters we encounter a general impression of weariness and aging, of a Europe which is now a “grandmother”, no longer fertile and vibrant. As a result, the great ideas which once inspired Europe seem to have lost their attraction, only to be replaced by the bureaucratic technicalities of its institutions.

Together with this, we encounter certain rather selfish lifestyles, marked by an opulence which is no longer sustainable and frequently indifferent to the world around us, and especially to the poorest of the poor. To our dismay we see technical and economic questions dominating political debate, to the detriment of genuine concern for human beings.[5] Men and women risk being reduced to mere cogs in a machine that treats them as items of consumption to be exploited, with the result that – as is so tragically apparent – whenever a human life no longer proves useful for that machine, it is discarded with few qualms, as in the case of the sick, of the terminally ill, the elderly who are abandoned and uncared for, and children who are killed in the womb.

This is the great mistake made “when technology is allowed to take over”;[6] the result is a confusion between ends and means”.[7] It is the inevitable consequence of a “throwaway culture” and an uncontrolled consumerism. Upholding the dignity of the person means instead acknowledging the value of human life, which is freely given us and hence cannot be an object of trade or commerce. As members of this Parliament, you are called to a great mission which may at times seem an impossible one: to tend to the needs, the needs of individuals and peoples. To tend to those in need takes strength and tenderness, effort and generosity in the midst of a functionalistic and privatized mindset which inexorably leads to a “throwaway culture”. To care for individuals and peoples in need means protecting memory and hope; it means taking responsibility for the present with its situations of utter marginalization and anguish, and being capable of bestowing dignity upon it.[8]

How, then, can hope in the future be restored, so that, beginning with the younger generation, there can be a rediscovery of that confidence needed to pursue the great ideal of a united and peaceful Europe, a Europe which is creative and resourceful, respectful of rights and conscious of its duties?
To answer this question, allow me to use an image. One of the most celebrated frescoes of Raphael is found in the Vatican and depicts the so-called “School of Athens”. Plato and Aristotle are in the centre. Plato’s finger is pointed upward, to the world of ideas, to the sky, to heaven as we might say. Aristotle holds his hand out before him, towards the viewer, towards the world, concrete reality. This strikes me as a very apt image of Europe and her history, made up of the constant interplay between heaven and earth, where the sky suggests that openness to the transcendent – to God – which has always distinguished the peoples of Europe, while the earth represents Europe’s practical and concrete ability to confront situations and problems.

The future of Europe depends on the recovery of the vital connection between these two elements. A Europe which is no longer open to the transcendent dimension of life is a Europe which risks slowly losing its own soul and that “humanistic spirit” which it still loves and defends.

Taking as a starting point this opening to the transcendent, I would like to reaffirm the centrality of the human person, which otherwise is at the mercy of the whims and the powers of the moment. I consider to be fundamental not only the legacy that Christianity has offered in the past to the social and cultural formation of the continent, but above all the contribution which it desires to offer today, and in the future, to Europe’s growth. This contribution does not represent a threat to the secularity of states or to the independence of the institutions of the European Union, but rather an enrichment. This is clear from the ideals which shaped Europe from the beginning, such as peace, subsidiarity and reciprocal solidarity, and a humanism centred on respect for the dignity of the human person. […]

«That politicians govern us well»

A good Christian actively participates in politics and prays that politicians may love their people and serve them with humility. This was the reflection of Pope Francis on Monday morning, 16 September, at the Mass celebrated in the Chapel of the Domus Sanctae Marthae.

Commenting on the passage from Luke’s Gospel (7:1-10), which speaks of Jesus healing the centurion’s servant at Capernaum, the Pope spoke about the “two attitudes of a ruler”. Before all else he must “love his people. The elderly Jews say to Jesus: he deserves what he asks for because he loves our people. A ruler who does not love cannot govern. At most he can only make a bit of order, but he cannot govern”.
For Pope Francis a ruler must also be humble like the centurion in the Gospel, who could have boasted of his power to get Jesus to come to him, but he “was a humble man and instead said to the Lord: do not trouble yourself, for I am not worthy to have you come under my roof. With humility he said: only say a word, and my servant will be healed. These are the two virtues of a ruler, and this is what the word of God inspires in us: to love people and humility”.

The Holy Father noted that television and newspapers rely primarily on “abusing” politicians. There is hardly anyone reporting that “this leader has done well in this, and this leader has this virtue. He was wrong in this… but in this he did well”. On the contrary people always speak badly of politicians and are always against them. “Perhaps the leader is a sinner, as David was. I have to work with others, with my opinion, with my words, to help amend: I do not agree for this reason or for that. We need to participate for the common good. Sometimes we hear: a good Catholic is not interested in politics. This is not true: good Catholics immerse themselves in politics by offering the best of themselves so that the leader can govern”.

“Let us pray for leaders”, said Pope Francis, “that they govern us well. That they bring our homeland, our nations, our world, forward, to achieve peace and the common good. This word of God helps us to better participate in the common life of a people: those who govern, with the service of humility and love, and the governed, with participation, and especially prayer”.