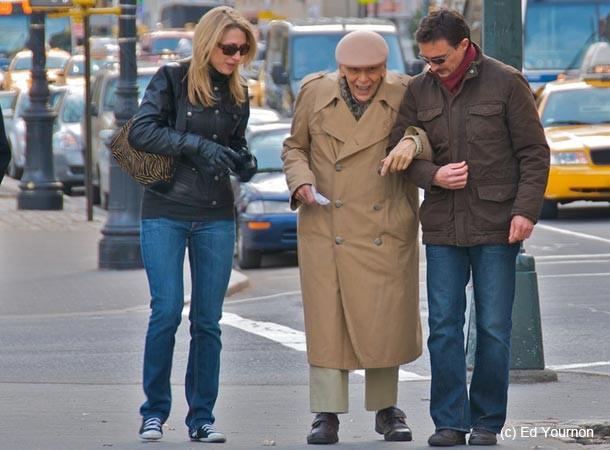 That the aged, marginalized, and those who have no one may find–even within the huge cities of the world–opportunities for encounter and solidarity.

[…] In a special way, old age is a time of grace, in which the Lord renews his call to us: he calls us to safeguard and transmit the faith, he calls us to pray, especially to intercede; he calls us to be close to those in need…. The elderly, grandparents have the ability to understand the most difficult of situations: a great ability! And when they pray for these situations, their prayer is strong; it is powerful!
Grandparents, who have received the blessing to see their children’s children (cf. Ps 128: 6), are entrusted with a great responsibility: to transmit their life experience, their family history, the history of a community, of a people; to share wisdom with simplicity, and the faith itself — the most precious heritage! Happy is the family who have grandparents close by! A grandfather is a father twice over and a grandmother is a mother twice over. In those Countries where religious persecution has been cruel — I am thinking, for instance, of Albania, where I was last Sunday — in those Countries it was the grandparents who brought the children to be baptized in secret, to give them the faith. Well done! They were brave in persecution and they saved the faith in those Countries!
But not every older person, grandfather, grandmother, has a family who can take him or her in. And so homes for the elderly are welcome… may they be real homes and not prisons! And may they be for the elderly, and not for the interests of anyone else! They must not be institutions where the elderly live forgotten, hidden and neglected. I feel close to the many elderly who live in these institutions, and I think with gratitude of those who go to visit and care for them. Homes for the elderly should be the “lungs” of humanity in a town, a neighbourhood or a parish. They should be the “sanctuaries” of humanity where one who is old and weak is cared for and protected like a big brother or sister. It is so good to go visit an elderly person! Look at our children: sometimes we see them listless and sad; they go visit an elderly person and become joyful!
However, the reality is that elderly people are being abandoned: the elderly are so often discarded with an attitude of abandonment, which is actually real and hidden euthanasia! It is the result of a throw away culture which is so harmful to our world. Children are thrown away, young people are thrown away, because they have no work, and the elderly are thrown away with the pretence of maintaining a “balanced” economy, which has at its centre not the human person but money. We are all called to oppose this poisonous, throw away culture!
We Christians, together with all people of good will, are called to patiently build a more diverse, more welcoming, more humane, more inclusive society that does not need to discard those who are weak in body and mind. On the contrary we need a society which measures its success on how the weak are cared for.
As Christians and as citizens, we are called to envision, with imagination and wisdom, ways of facing this challenge. A people who does not take care of grandparents, who does not treat them well has no future! Why does it have no future? Because such a people loses its memory and is torn from its roots. But beware: it is your responsibility to keep these roots alive in yourselves with prayer, by reading the Gospel and with works of mercy. In this way we will remain as living trees, that even in old age will not stop bearing fruit. One of the most beautiful aspects of family life, of our human life as a family, is caressing a baby and being caressed by a grandfather and a grandmother. Thank you!

[…] “We live in a time when the elderly don’t count”, he said. “It’s unpleasant to say it, but they are set aside because they are considered a nuisance”. And yet, he added, “the elderly pass on history, doctrine, faith and they leave them to us as an inheritance. They are like a fine vintage wine; that is, they have within themselves the power to give us this noble inheritance”.
Pope Francis then pointed to another man who was “advanced in age and of noble presence”, the aged Polycarp who was sentenced to the stake. “When the fire began to burn”, the Bishop of Rome recounted, “those around him could only smell the pleasant odour of fresh-baked bread. This is what the elderly are for us”, he continued, “Fine vintage wine and good bread”. “And yet”, he lamented “especially in this world they are considered a nuisance”.
The Pope then recalled a story he was told as a young child. “There was a father, mother and their many children, and a grandfather lived with them. He was quite old, and when he was at table eating soup, he would get everything dirty: his mouth, the serviette … it was not a pretty sight! One day the father said that, given what was happening to the grandfather, from that day forward he would eat alone. And so he bought a little table, and placed it in the kitchen. And so the grandfather ate alone in the kitchen while the family ate in the dining room. After some days, the father returned home from work and found one of his children playing with wood. He asked him: ‘What are you doing?’ to which the child replied: ‘I am playing carpenter’. ‘And what are you building?’ the father asked. ‘A table for you, papa, for when you get old like grandpa’. This story has stayed with me for a lifetime and done me great good”, Pope Francis said. “Grandparents are a treasure”.
Returning to what the Scriptures teach us about the elderly, Pope Francis then cited the Letter to the Hebrews. “There we read: ‘Remember your leaders, those who spoke to you the word of God: consider the outcome of their life, and imitate their faith’ (13:7). The remembrance of our ancestors leads us to imitate their faith. It is true that old age is at times unpleasant, because of the illnesses it brings. But the wisdom of our grandparents is the inheritance we ought to receive. A people that does not care for its grandparents, that does not respect its grandparents, has no future since it has lost its memory. Faced with martyrdom, Eleazar was aware of his responsibility to the young. He thought about God, but he also thought about the young, saying: ‘I must give the young a credible example to the very end’”.
Pope Francis concluded: “We would do well to think about the many elderly men and women, about those who are in rest homes and also those — it is an unpleasant word but let us say it — who have been abandoned by their loved ones. Let us pray for them that they may be consistent to the very end. This is the role of the elderly, this is the treasure. Let us pray for our grandfathers and grandmothers who often played a heroic role in handing on the faith in times of persecution. Especially in times past, when fathers and mothers often were not at home or had strange ideas, confused as they were by the fashionable ideologies of the day, grandmothers were the ones who handed on the Faith”.