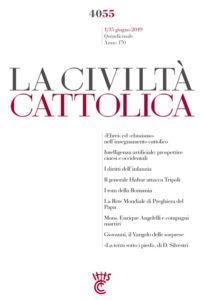 “Some thirty, some sixty, and some even a

The Pope’s Worldwide Prayer Network celebrates its 175th anniversary on June 28th and 29th, 2019, with more than 6000 people from 52 delegations around the world. For a year now it has been a Pontifical Work instituted by Pope Francis, recorded under the number 49 in the Vatican’s register of legal entities. How did it happen that this ecclesial service —which in many parts of the world was gradually disappearing and was often seen as a black and white photo reminding us of the precious and ancient history of the mission of the Church— could be reborn today? Let us go back a little while.

«Click To Pray» digital platform
January 20, 2019. Pope Francis, standing by the window where he prays the Angelus every Sunday, announced: “I would like to introduce you the official platform of the Pope’s Worldwide Prayer Network: Click To Pray. I will include here the intentions and petitions of prayer for the mission of the Church.

” The World Youth Day (WYD) was about to begin and the Holy Father was inviting, specially the young, to download the Click To Pray application so they could join him in praying the Rosary for Peace. Many were hearing about Click To Pray for the first time. One may think that this was only a show of support to a prayer platform for the WYD of Panama. However, with this Angelus, it becomes the Holy Father’s third existing social network. Along with Twitter (@Pontifex), and Instagram (@Franciscus), he now has his personal prayer profile on Click To Pray (Pope Francis).

Click To Pray was not an unknown digital platform in the Catholic Church — it existed alongside many others of high quality and with more history. It is the official platform of the Pope’s Worldwide Prayer Network and it had its own history, built upon a digital community with more than a million users in six languages, at that time. In addition, it was already the official prayer platform of WYD Panama. However, when the Pope created his personal prayer profile, he gave Click To Pray a huge boost.

News travel quickly around the world these days —on televisions, social networks and news programs that generally do not broadcast Catholic news. From Japan to Australia, from Gabon to South Africa, via India and the USA… not to mention many European and Latin American countries, such as Brazil. BBC World said: “Pope Francis has launched an app to encourage Catholics around the world to pray with him.”

In a few days, tens of thousands of young people were already using it, doubling its capacity and reaching more than 420,000 downloads and over 4 million prayers. It is difficult to measure how “fruitful” prayer can be, since it is always as invisible as the process of germination in the depths of the earth, that bears its fruit in due time. However, the impact cannot be denied. The technical challenges, which are posed by necessary adjustments the platform needs while it is working (App with Android and IOS website, blog, social networks, daily email), contrast with the tens of thousands of connections, making an evident impact worldwide.