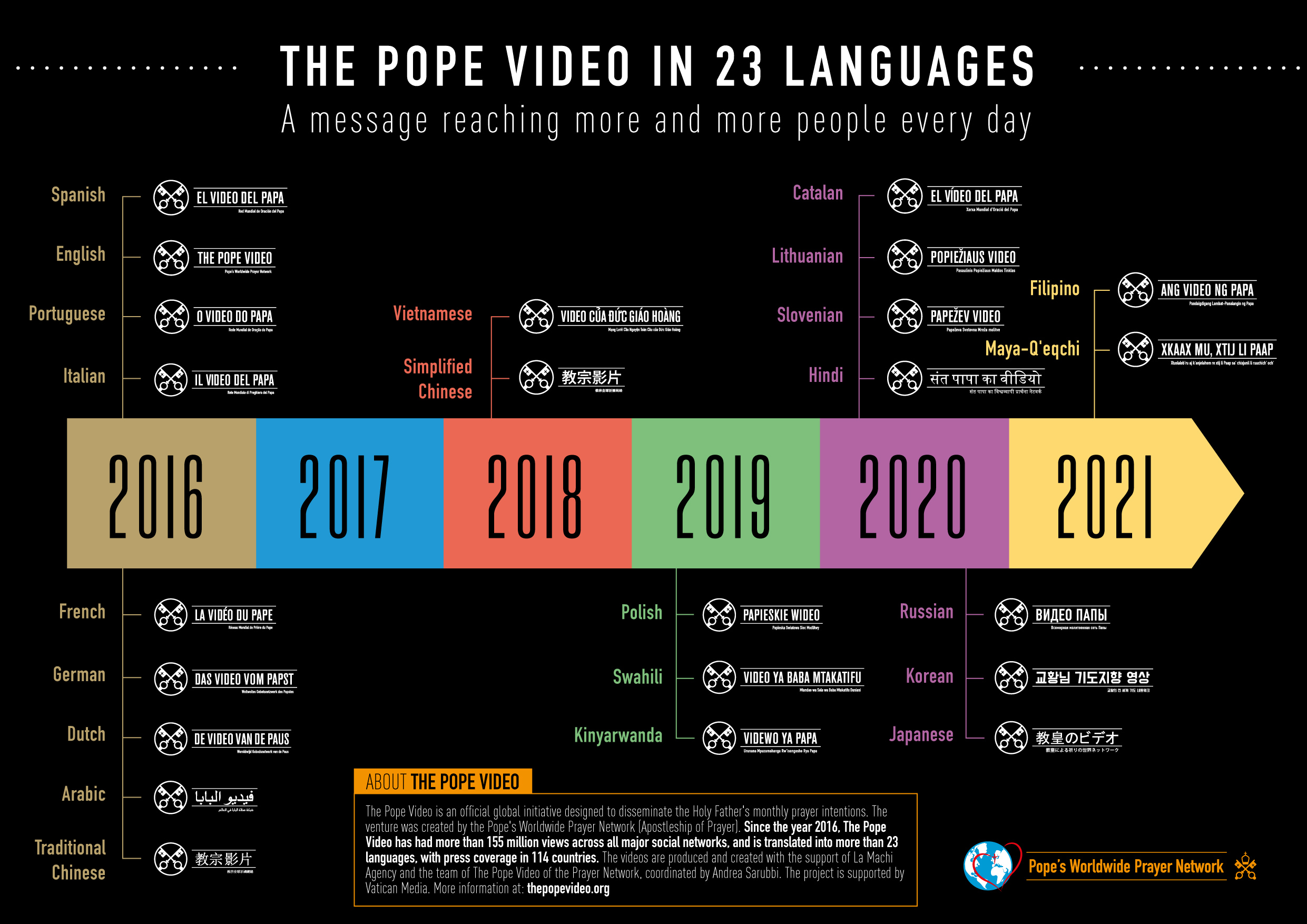 In 2021 The Pope Video is available in 23 different languages

The Holy Father Francis announces his prayer intentions every month in The Pope Video, a global initiative of the Pope’s Worldwide Prayer Network. The Pope Video is now celebrating five years and is already broadcasting in 23 different languages.

(Vatican City, 23 May 2021) – Each month Pope Francis shares his prayer intentions regarding the challenges facing humanity and the mission of the Church. The Pope’s Worldwide Prayer Network (Apostleship of Prayer and EYM) brings these intentions to the world through The Pope Video, a global project transmitted mainly on major social media networks. Now in 2021 The Pope Video is being broadcast in 23 different languages.

The Pope Video was developed in 2016, originally in nine official languages: Spanish, English, Portuguese, Italian, French, German, Dutch, Arabic and traditional Chinese. As time went on the project expanded considerably in scope and more languages such as Vietnamese, simplified Chinese, Polish, Swahili, Kinyarwanda, Catalan, Lithuanian, Slovenian, Hindi, Russian, Korean and Japanese were added as well. This year, to celebrate the fifth anniversary of The Pope Video, two further languages have been added, Filipino and the Mayan language Q’eqchi.

Today the videos of the prayer intentions of Pope Francis have received more than 155 million views across the social networks of the Vatican and partners and have been covered in more than 17,500 international newspaper articles.

Father Frédéric Fornos S.J., International Director of the Pope’s Worldwide Prayer Network, explains how important it is for the Pope’s message to be conveyed in all languages and cultures: “The Heart of the Church’s mission is prayer, Francis tells us. Praying is entering into loving communication with the Father. This is a profound, intimate relationship, and there is no better way to speak to Him than in our own language, just as Jesus himself said, in his own Aramaic tongue: “Abba”, “Father”.  In order to pray for the challenges facing humanity and the Church’s mission, there is nothing better than to follow the prayer intentions of the Pope in our own language. Each of us prays in our own language while we are all united through prayer”.

The Pope Video continues to expand so that people all over the world may join in prayer for the intentions of the Holy Father.  Each one prays in their own language but all are united through prayer, for the challenges facing humanity and the mission of the Church.

This project is only possible thanks to donations and we are grateful for your support through our website.

Where can you watch the videos?

The Pope Video is an official global initiative designed to disseminate the Holy Father’s monthly prayer intentions. The venture was created by the Pope’s Worldwide Prayer Network (Apostleship of Prayer). Since the year 2016, The Pope Video has had more than 155 million views across the social networks of the Vatican, and is translated into more than 23 languages, with press coverage in 114 countries. The videos are produced and created with the support of La Machi Agency and the team of The Pope Video of the Prayer Network, coordinated by Andrea Sarubbi. The project is supported by Vatican Media. More information at: thepopevideo.org

The Pope’s Worldwide Prayer Network is a Vatican foundation, with the mission of mobilizing Catholics through prayer and action in response to the challenges facing humanity and the mission of the Church. These challenges are presented in the form of prayer intentions entrusted by the Holy Father to the entire Church. The foundation’s mission is inscribed in the dynamic of the Heart of Jesus, a mission of compassion for the world. Originally founded in 1844 as the Apostleship of Prayer, the PWPN is present in 89 countries and incorporates more than 22 million Catholics. The Network includes a youth branch, the EYM: Eucharistic Youth Movement. In December 2020, the Pope constituted this pontifical work as a Vatican foundation and approved the new statutes.  Fr. Frédéric Fornos, SJ, is the international director of the PWPN. For more information, visit: https://www.popesprayer.va