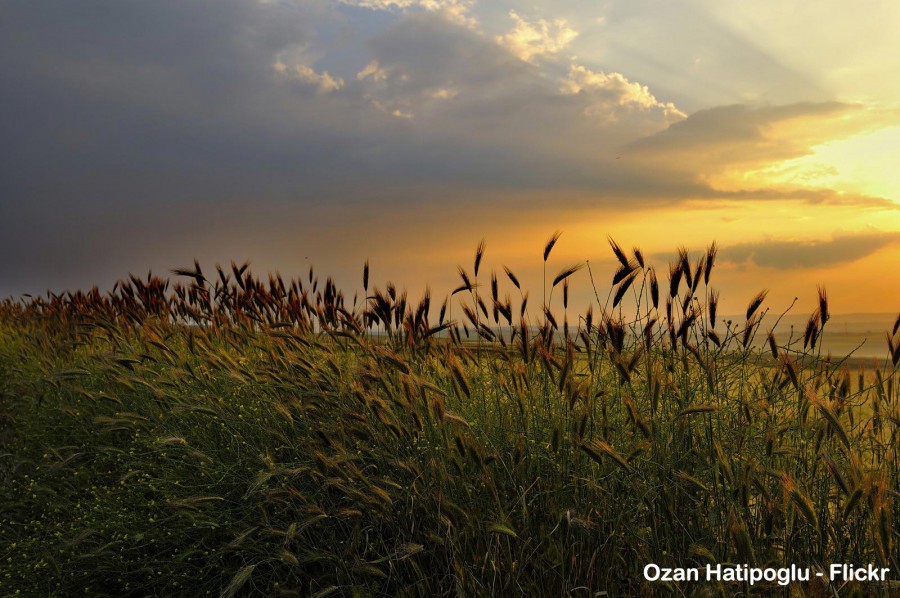 That we may take good care of creation–a gift freely given–cultivating and protecting it for future generations.

1. “LAUDATO SI’, mi’ Signore” – “Praise be to you, my Lord”.In the words of this beautiful canticle, Saint Francis of Assisi reminds us that our common home is like a sister with whom we share our life and a beautiful mother who opens her arms to embrace us. “Praise be to you, my Lord, through our Sister, Mother Earth, who sustains and governs us, and who produces various fruit with coloured flowers and herbs”.[1]

2. This sister now cries out to us because of the harm we have inflicted on her by our irresponsible use and abuse of the goods with which God has endowed her. We have come to see ourselves as her lords and masters, entitled to plunder her at will. The violence present in our hearts, wounded by sin, is also reflected in the symptoms of sickness evident in the soil, in the water, in the air and in all forms of life. This is why the earth herself, burdened and laid waste, is among the most abandoned and maltreated of our poor; she “groans in travail” (Rom 8:22). We have forgotten that we ourselves are dust of the earth (cf. Gen 2:7); our very bodies are made up of her elements, we breathe her air and we receive life and refreshment from her waters.

67. We are not God. The earth was here before us and it has been given to us. This allows us to respond to the charge that Judaeo-Christian thinking, on the basis of the Genesis account which grants man “dominion” over the earth (cf. Gen 1:28), has encouraged the unbridled exploitation of nature by painting him as domineering and destructive by nature. This is not a correct interpretation of the Bible as understood by the Church. Although it is true that we Christians have at times incorrectly interpreted the Scriptures, nowadays we must forcefully reject the notion that our being created in God’s image and given dominion over the earth justifies absolute domination over other creatures. The biblical texts are to be read in their context, with an appropriate hermeneutic, recognizing that they tell us to “till and keep” the garden of the world (cf. Gen 2:15). “Tilling” refers to cultivating, ploughing or working, while “keeping” means caring, protecting, overseeing and preserving. This implies a relationship of mutual responsibility between human beings and nature. Each community can take from the bounty of the earth whatever it needs for subsistence, but it also has the duty to protect the earth and to ensure its fruitfulness for coming generations. “The earth is the Lord’s” (Ps24:1); to him belongs “the earth with all that is within it” (Dt 10:14). Thus God rejects every claim to absolute ownership: “The land shall not be sold in perpetuity, for the land is mine; for you are strangers and sojourners with me” (Lev25:23).

159. The notion of the common good also extends to future generations. The global economic crises have made painfully obvious the detrimental effects of disregarding our common destiny, which cannot exclude those who come after us. We can no longer speak of sustainable development apart from intergenerational solidarity. Once we start to think about the kind of world we are leaving to future generations, we look at things differently; we realize that the world is a gift which we have freely received and must share with others. Since the world has been given to us, we can no longer view reality in a purely utilitarian way, in which efficiency and productivity are entirely geared to our individual benefit. Intergenerational solidarity is not optional, but rather a basic question of justice, since the world we have received also belongs to those who will follow us. The Portuguese bishops have called upon us to acknowledge this obligation of justice: “The environment is part of a logic of receptivity. It is on loan to each generation, which must then hand it on to the next”.[124]An integral ecology is marked by this broader vision.

160. What kind of world do we want to leave to those who come after us, to children who are now growing up? This question not only concerns the environment in isolation; the issue cannot be approached piecemeal. When we ask ourselves what kind of world we want to leave behind, we think in the first place of its general direction, its meaning and its values. Unless we struggle with these deeper issues, I do not believe that our concern for ecology will produce significant results. But if these issues are courageously faced, we are led inexorably to ask other pointed questions: What is the purpose of our life in this world? Why are we here? What is the goal of our work and all our efforts? What need does the earth have of us? It is no longer enough, then, simply to state that we should be concerned for future generations. We need to see that what is at stake is our own dignity. Leaving an inhabitable planet to future generations is, first and foremost, up to us. The issue is one which dramatically affects us, for it has to do with the ultimate meaning of our earthly sojourn.

161. Doomsday predictions can no longer be met with irony or disdain. We may well be leaving to coming generations debris, desolation and filth. The pace of consumption, waste and environmental change has so stretched the planet’s capacity that our contemporary lifestyle, unsustainable as it is, can only precipitate catastrophes, such as those which even now periodically occur in different areas of the world. The effects of the present imbalance can only be reduced by our decisive action, here and now. We need to reflect on our accountability before those who will have to endure the dire consequences.

Lead the way in creation

[…] Our time cannot ignore the issue of ecology, which is vital to man’s survival, nor reduce it to merely a political question: indeed, it has a moral dimension that affects everyone, such that no one can ignore it. As disciples of Christ, we have a further reason to join with all men and women of good will to protect and defend nature and the environment. Creation is, in fact, a gift entrusted to us from the hands of the Creator. All of nature that surrounds us is created like us, created together with us, and in a common destiny it tends to find its fulfillment and ultimate end in God himself — the Bible says “new heavens and a new earth” (cf. Is 65:17, 2 Pet 3:13; Rev 21:1). This doctrine of our faith is an even stronger stimulus for us to have a responsible and respectful relationship with Creation: in inanimate nature, in plants and in animals, we recognize the imprint of the Creator, and in our fellow kind, His very image.

Living in closer contact with nature, as you do, entails not only respect for it but also the commitment to contribute concretely to eliminate the wastefulness of a society that increasingly tends to throw away goods which are still useful and which can be donated to the many who are in need. […]