Universal day of prayer and fasting for Lebanon 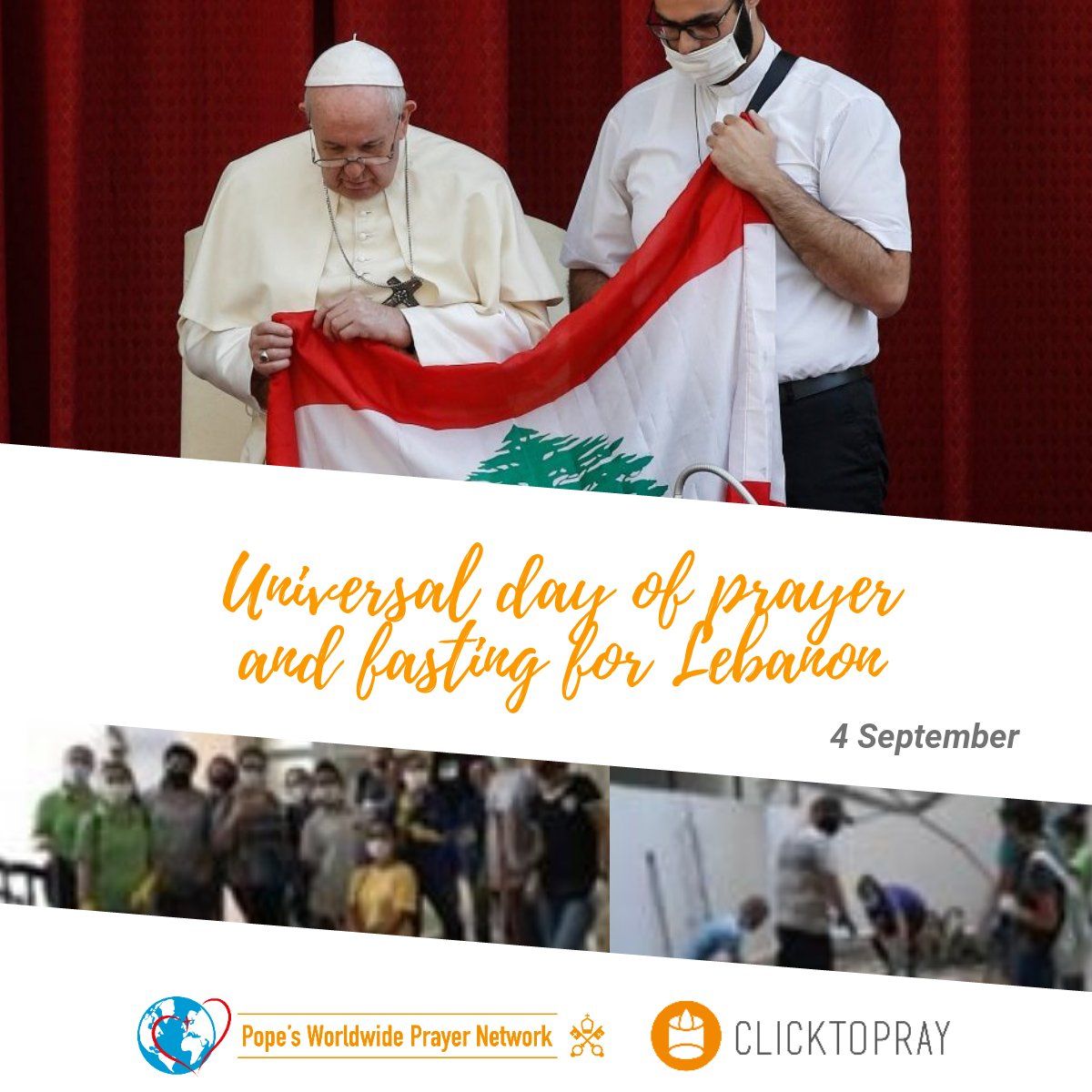 For Lebanon and Beirut

I would ask everyone to join in a universal day of prayer and fasting for Lebanon on Friday next, 4 September. Let us pray for Lebanon as a whole and for Beirut. And let us demonstrate our closeness by concrete works of charity. 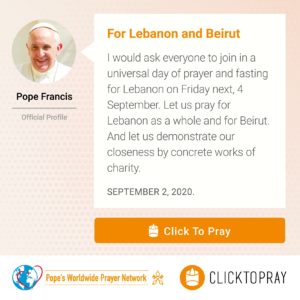 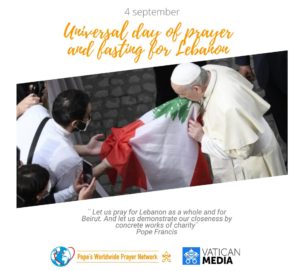 One month after the tragedy that struck the city of Beirut, my thoughts turn once again to Lebanon and its people, so sorely tried. The priest beside me has brought the Lebanese flag to this Audience.

Today, I would repeat the words spoken by Saint John Paul II thirty years ago, at a crucial moment in Lebanon’s history: “Faced with repeated tragedies which each of the land’s inhabitants knows, we are aware of the extreme danger that threatens the very existence of the country: Lebanon cannot be abandoned in its solitude” (Apostolic Letter to the Bishops of the Catholic Church on the situation in Lebanon, 7 September 1989).

For over a hundred years, Lebanon has been a country of hope. Even in the darkest periods of its history, the Lebanese people maintained their faith in God and proved capable of making their land a place of tolerance, respect and coexistence unique in that region. How true it is that Lebanon is more than a State: it is “a message of freedom and an example of pluralism, both for the East and for the West” (ibid.). For the good of the country and the world, we cannot let this legacy be lost.

I encourage all Lebanese to persevere in hope and to summon the strength and energy needed to start anew. I ask political and religious leaders to commit themselves with sincerity and openness to the work of rebuilding, setting aside all partisan interests and looking to the common good and the future of the nation. Once again, I ask the international community to support Lebanon and to help it emerge from this grave crisis, without becoming caught up in regional tensions.

In a special way, my thoughts turn to the people of Beirut, who have suffered so greatly from the explosion. Brothers and sisters, take courage once more! Let faith and prayer be your strength. Do not abandon your homes and your heritage. Do not abandon the dreams of those who believed in the dawn of a beautiful and prosperous country.

Dear bishops, priests, consecrated and lay persons, continue to accompany the faithful. Of you, bishops and priests, I ask apostolic zeal, poverty and austerity. Be poor together with your poor and suffering people. Be the first to give an example of poverty and humility. Help the faithful and your people to rise again and contribute actively to a new rebirth. May all alike foster concord and renewal in the name of the common good and a genuine culture of encounter, peaceful coexistence and fraternity. Fraternity: a word so dear to Saint Francis. May this concord be a source of renewal in the common interest. This will prove a sure basis for the continuity of the Christian presence and your own inestimable contribution to the country, the Arab world and the whole region, in a spirit of fraternity among all the religious traditions present in Lebanon.

For this reason, I would ask everyone to join in a universal day of prayer and fasting for Lebanon on Friday next, 4 September. I intend to sent my own representative to Lebanon that day to be present with its people: The Secretary of State will go in my name to express my spiritual closeness and solidarity. Let us pray for Lebanon as a whole and for Beirut. And let us demonstrate our closeness by concrete works of charity, as on other similar occasions. I also invite our brothers and sisters of other religious confessions to join in this initiative in whatever way they deem best, but together as one.

And now I ask you to entrust to Mary, Our Lady of Harissa, our hopes and our fears. May she sustain all who grieve for their loved ones and instil courage in those who have lost their homes and, with them, a part of their lives! May she intercede with the Lord Jesus so that the Land of Cedars may flourish once again and spread the fragrance of fraternal coexistence throughout the entire Middle East.

And now I ask everyone, to the extent it is possible, to stand and pray in silence for Lebanon.