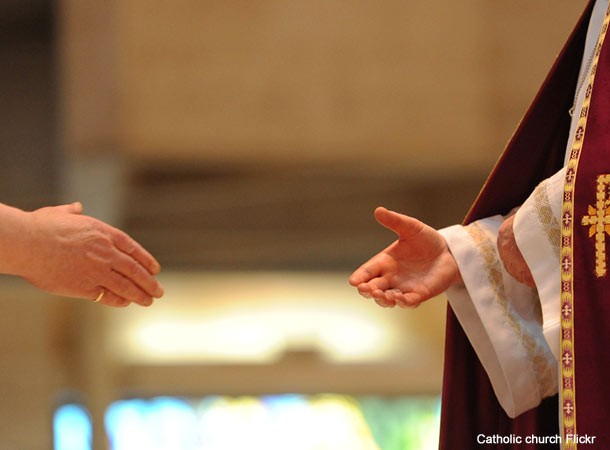 That sincere dialogue among men and women of different faiths may produce the fruits of peace and justice.

“Religious freedom […] is not only a precious gift from the Lord for those who have faith: it is a gift for each person, because it is the basic guarantee of every other expression of freedom […]. Only faith reminds us that, if we have one Creator, we are therefore all brothers and sisters. Religious freedom is a safeguard against all forms of totalitarianism and contributes decisively to human fraternity” (Message to the Albanian People, 25 April 1993).

He immediately then added, “True religious freedom shuns the temptation to intolerance and sectarianism, and promotes attitudes of respect and constructive dialogue” (ibid.). We cannot deny that intolerance towards those with different religious convictions is a particularly insidious enemy, one which today is being witnessed in various areas around the world. All believers must be particularly vigilant so that, in living out with conviction our religious and ethical code, we may always express the mystery we intend to honour. This means that all those forms which present a distorted use of religion, must be firmly refuted as false since they are unworthy of God or humanity. Authentic religion is a source of peace and not of violence! No one must use the name of God to commit violence! To kill in the name of God is a grave sacrilege. To discriminate in the name of God is inhuman.

Seen in this light, religious freedom is not a right which can be guaranteed solely by existing legislation, although laws are necessary. Rather religious freedom is a shared space – like this one – an atmosphere of respect and cooperation that must be built with everyone’s participation, even those who have no religious convictions. Allow me to outline two attitudes which can be especially helpful in the advancement of this fundamental freedom.

The first attitude is that of regarding every man and woman, even those of different religious traditions, not as rivals, less still enemies, but rather as brothers and sisters. When a person is secure of his or her own beliefs, there is no need to impose or put pressure on others: there is a conviction that truth has its own power of attraction. Deep down, we are all pilgrims on this earth, and on this pilgrim journey, as we yearn for truth and eternity, we do not live autonomous and self-sufficient individual lives; the same applies to religious, cultural and national communities. We need each other, and are entrusted to each other’s care. Each religious tradition, from within, must be able to take account of others.

The second attitude which fosters the promotion of religious freedom is the work done in service of the common good. Whenever adherence to a specific religious tradition gives birth to service that shows conviction, generosity and concern for the whole of society without making distinctions, then there too exists an authentic and mature living out of religious freedom. This presents itself not only as a space in which to legitimately defend one’s autonomy, but also as a potential that enriches the human family as it advances. The more men and women are at the service of others, the greater their freedom!

Let us look around us: there are so many poor and needy people, so many societies that try to find a more inclusive way of social justice and path of economic development! How great is the need for the human heart to be firmly fixed on the deepest meaning of experiences in life and rooted in a rediscovery of hope! Men and women, inspired in these areas by the values of their respective religious traditions, can offer an important, and even unique, contribution. This is truly a fertile land offering much fruit, also in the field of interreligious dialogue.

I also wish to mention something which is always an illusion: relativism, “everything is relative”. In this regard, we must keep in mind a clear principle: we cannot enter into dialogue if we do not approach it from the perspective of our own identity. Without identity, there can be no dialogue. It would be an illusory dialogue, a dialogue without substance: it would serve no purpose. All of us have our own religious identity to which we are faithful. But the Lord knows how to guide history. May each one of us begin with our own identity, not pretending to have another, because it serves no end and does not help; it is relativism. What unites us is the path of life, is starting from our own identify for the good of our brothers and sisters. To do good! And so, we walk together as brothers and sisters. Every one of us offers the witness of our identity to others and engages in dialogue with others. Then dialogue can move onto theological questions. But even more important and beautiful is to walk together without betraying our own identity, without disguising it, without hypocrisy. This is what I like to think.

How to create dialogue

Pope Francis continued his reflection on the first book of Samuel (24:3-21), which recounts the confrontation between Saul and David. “Yesterday,” the Pope reminded those who were present at the morning celebration of Mass, “we heard the word of God, which allowed us to see what jealousy does, what envy does in families and in Christian communities. We saw this story played out in the opposition Saul harboured in his heart against David: so jealous was he that he wanted to kill him”.

“Today,” the Pope continued, “the word of God allows us to see another attitude, that of David”, who “knew very well” that he was “in danger; he knew that the king wanted to kill him. And he found himself in a situation in which he could have killed the king, and the story would have ended there”. And yet “he chose another path”; he preferred “to draw near, to seek to clarify the situation, to explain himself, he chose the path of dialogue to make peace”.

Instead, Saul “brooded over bitterness in his heart”. He insulted David “because he believed him to be his enemy. And this bitterness grew in his heart”. Unfortunately, the Pope said, “these imaginings always grow stronger when we listen to them within ourselves. And they create a wall that distances us from the other person”. Ultimately, we end up “isolated in the bitter broth of our resentment”.

Yet David, “by the Lord’s inspiration”, breaks this mechanism of hatred “and says no, I want to talk to you”. And thus it is, the Pope explained, “that the path of peace begins, with dialogue”. But, he warned, “dialogue is not easy, it is difficult”. And yet, it is only “with dialogue that we build bridges of peace in relationships rather than walls that distance us”.

“For dialogue to occur, what we need above all else is humility. It was David who, in humility, said to the king: look, ‘I could have killed you, I could have done this to you, but I don’t want to do it! I want to be close to you because you are the authority, you are the Lord’s anointed!’”. David’s act was an “act of humility”.

We don’t need to raise our voice in order to dialogue “what we need is meekness”. And “we need to consider that the other person has something more that we do”, as David did. Looking at Saul, he said to himself: “He is the Lord’s anointed, he is more important than I am”. We need to do what we prayed for in the opening of Mass: become all things to all”.

“Humility, meekness, becoming all things to all” are three basic elements of dialogue. However, the Holy Father noted, even though “it is not written in the Bible, to do this we have to eat a lot of crow: yet we must do it because that’s how peace is made!” Peace is made “with humility and humiliation”, by seeking always to “see in the other person the image of God”. Solutions to so many problems are found “through dialogue in families, in communities, in all quarters”. It requires a readiness to acknowledge to another person: “But listen, excuse me, this is what I thought…”. The right attitude is “to humble oneself: it is always good to make a bridge, always always!”. This is in keeping with the manner of someone who wants “to be Christian”; even if, as the Pope admitted, “it is not easy, it is not easy!”. And yet “Jesus did this, he humbled himself unto the end, he showed us the way”.