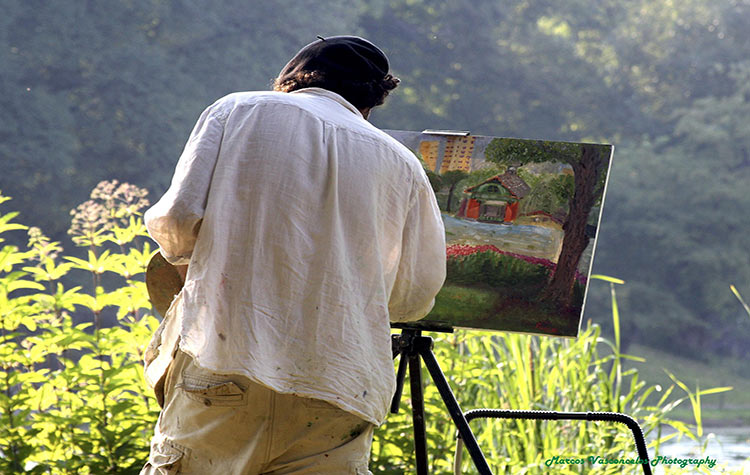 That artists of our time, through their ingenuity, may help everyone discover the beauty of creation.

To all who are passionately dedicated
to the search for new “epiphanies” of beauty
so that through their creative work as artists
they may offer these as gifts to the world.

The artist, image of God the Creator

1. None can sense more deeply than you artists, ingenious creators of beauty that you are, something of the pathos with which God at the dawn of creation looked upon the work of his hands. A glimmer of that feeling has shone so often in your eyes when—like the artists of every age—captivated by the hidden power of sounds and words, colours and shapes, you have admired the work of your inspiration, sensing in it some echo of the mystery of creation with which God, the sole creator of all things, has wished in some way to associate you.

That is why it seems to me that there are no better words than the text of Genesis with which to begin my Letter to you, to whom I feel closely linked by experiences reaching far back in time and which have indelibly marked my life. In writing this Letter, I intend to follow the path of the fruitful dialogue between the Church and artists which has gone on unbroken through two thousand years of history, and which still, at the threshold of the Third Millennium, offers rich promise for the future.

In fact, this dialogue is not dictated merely by historical accident or practical need, but is rooted in the very essence of both religious experience and artistic creativity. The opening page of the Bible presents God as a kind of exemplar of everyone who produces a work: the human craftsman mirrors the image of God as Creator. This relationship is particularly clear in the Polish language because of the lexical link between the words stwórca (creator) and twórca (craftsman).

What is the difference between “creator” and “craftsman”? The one who creates bestows being itself, he brings something out of nothing—ex nihilo sui et subiecti, as the Latin puts it—and this, in the strict sense, is a mode of operation which belongs to the Almighty alone. The craftsman, by contrast, uses something that already exists, to which he gives form and meaning. This is the mode of operation peculiar to man as made in the image of God. In fact, after saying that God created man and woman “in his image” (cf. Gn 1:27), the Bible adds that he entrusted to them the task of dominating the earth (cf. Gn 1:28). This was the last day of creation (cf. Gn 1:28-31). On the previous days, marking as it were the rhythm of the birth of the cosmos, Yahweh had created the universe. Finally he created the human being, the noblest fruit of his design, to whom he subjected the visible world as a vast field in which human inventiveness might assert itself.

God therefore called man into existence, committing to him the craftsman’s task. Through his “artistic creativity” man appears more than ever “in the image of God”, and he accomplishes this task above all in shaping the wondrous “material” of his own humanity and then exercising creative dominion over the universe which surrounds him. With loving regard, the divine Artist passes on to the human artist a spark of his own surpassing wisdom, calling him to share in his creative power. Obviously, this is a sharing which leaves intact the infinite distance between the Creator and the creature, as Cardinal Nicholas of Cusa made clear: “Creative art, which it is the soul’s good fortune to entertain, is not to be identified with that essential art which is God himself, but is only a communication of it and a share in it”.(1)

That is why artists, the more conscious they are of their “gift”, are led all the more to see themselves and the whole of creation with eyes able to contemplate and give thanks, and to raise to God a hymn of praise. This is the only way for them to come to a full understanding of themselves, their vocation and their mission.  […]

Universal:  For artists
That artists of our time, though their creativity, may help us discover the beauty of creation.