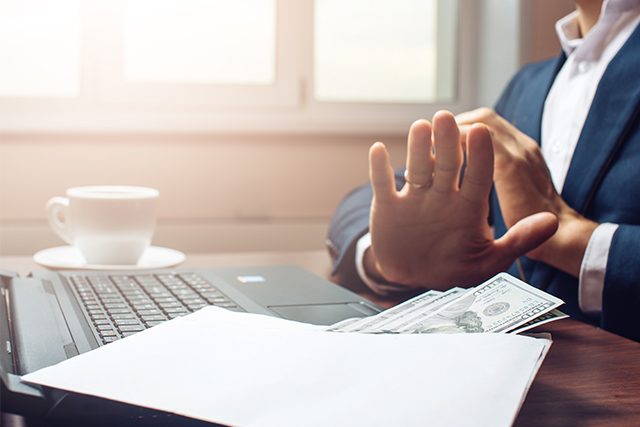 That those who have material, political or spiritual power may resist any lure of corruption.

In his homily during Holy Mass in the Chapel of Santa Marta, Pope Francis commented on the parable of the dishonest steward taken from the Gospel of St Luke (16:1-8).

The Holy Father began: “The Lord speaks to us again about the spirit of the world, about worldliness: how this worldliness works and how perilous it is. In his prayer after the Last Supper on Holy Thursday, Jesus besought the Father not to allow his disciples to fall into worldliness”.

The Pope reaffirmed that “worldliness is the enemy”, and “the devil derives great pleasure” from seeing us live according to its ways. He pointed to the dishonest steward described in the Gospel as an example of worldliness. “Some of you might say: ‘But this man only did what everyone does!’. No, not everyone! Some company administrators, public administrators, government administrators … but perhaps not many. It’s an attitude of taking short cuts, of taking the easy road to earn a living”.

“The master praises the dishonest steward in the Gospel”, the Pope continued. “He is praising bribery. The habit of bribes and kickbacks is a worldly and extremely sinful habit…. God commanded us to bring home bread through honest work”. Instead “this steward was giving dirty bread to his children to eat. And his children, who perhaps were educated in expensive universities and were raised in very cultured circles, were fed dirt by their father. For in bringing home unclean bread, their father lost his dignity. And this is a grave sin. It might start with a small bribe, but it is like a drug”.

Pope Francis explained, in fact, that it is a serious sin “because it is so against our dignity”. “That dignity by which we are united through our work. Not through bribes and kickbacks. Not through this addiction to worldly cunning. When we read in the papers or hear someone on the news speak about corruption, perhaps we think that corruption is just a word. This is corruption: not earning our daily bread with dignity”.

However, the Holy Father noted, there is another road, an alternative route to worldly cunning. It is the path of “Christian cleverness”. This path, he said, “allows us to be cunning but not according to the spirit of the world. Jesus himself said it: be wise as serpents, innocent as doves”. Uniting these two realities is a grace and a gift of the Holy Spirit, the Pope said. “This Christian cleverness is a gift; it is a grace that the Lord gives to us. But we need to ask for it”.

Pope Francis then turned his attention to the families of the world’s dishonest stewards. “Perhaps today,” he said, “it would be good for all of us to pray for the many children who receive dirty bread from their parents, since they too are hungry; they are hungry for dignity”.

The Holy Father concluded by inviting all of those present “to ask the Lord to change the hearts of those who are devoted to the goddess of bribery” in order that “they might understand that dignity comes from noble work, from honest work, from daily work, and not from the easy road which in the end strips you of everything”. For when they face death, he said, “these poor people who lose their dignity through the practice of bribery do not take with them the money they earned; they only take their lack of dignity. Let us pray for them”.