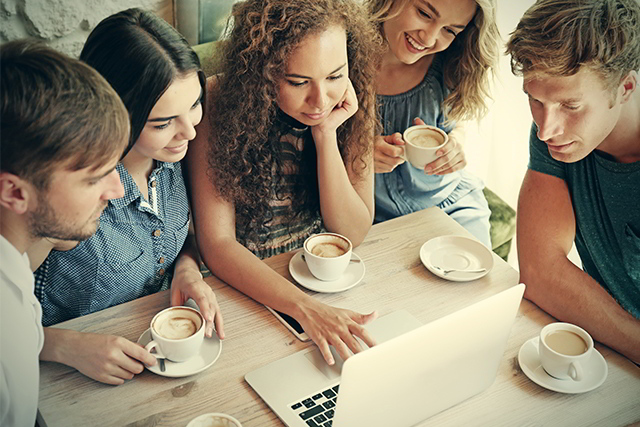 That social networks may work towards that inclusiveness which respects others for their differences.

Today we are living in a world which is growing ever “smaller” and where, as a result, it would seem to be easier for all of us to be neighbours.  Developments in travel and communications technology are bringing us closer together and making us more connected, even as globalization makes us increasingly interdependent.  Nonetheless, divisions, which are sometimes quite deep, continue to exist within our human family.  On the global level we see a scandalous gap between the opulence of the wealthy and the utter destitution of the poor.  Often we need only walk the streets of a city to see the contrast between people living on the street and the brilliant lights of the store windows.  We have become so accustomed to these things that they no longer unsettle us.  Our world suffers from many forms of exclusion, marginalization and poverty, to say nothing of conflicts born of a combination of economic, political, ideological, and, sadly, even religious motives.

In a world like this, media can help us to feel closer to one another, creating a sense of the unity of the human family which can in turn inspire solidarity and serious efforts to ensure a more dignified life for all.  Good communication helps us to grow closer, to know one another better, and ultimately, to grow in unity.  The walls which divide us can be broken down only if we are prepared to listen and learn from one another.  We need to resolve our differences through forms of dialogue which help us grow in understanding and mutual respect.  A culture of encounter demands that we be ready not only to give, but also to receive.  Media can help us greatly in this, especially nowadays, when the networks of human communication have made unprecedented advances.  The internet, in particular, offers immense possibilities for encounter and solidarity.  This is something truly good, a gift from God.

This is not to say that certain problems do not exist.  The speed with which information is communicated exceeds our capacity for reflection and judgement, and this does not make for more balanced and proper forms of self-expression.  The variety of opinions being aired can be seen as helpful, but it also enables people to barricade themselves behind sources of information which only confirm their own wishes and ideas, or political and economic interests.  The world of communications can help us either to expand our knowledge or to lose our bearings.  The desire for digital connectivity can have the effect of isolating us from our neighbours, from those closest to us.  We should not overlook the fact that those who for whatever reason lack access to social media run the risk of being left behind.

While these drawbacks are real, they do not justify rejecting social media; rather, they remind us that communication is ultimately a human rather than technological achievement.  What is it, then, that helps us, in the digital environment, to grow in humanity and mutual understanding?  We need, for example, to recover a certain sense of deliberateness and calm.  This calls for time and the ability to be silent and to listen.  We need also to be patient if we want to understand those who are different from us.  People only express themselves fully when they are not merely tolerated, but know that they are truly accepted.  If we are genuinely attentive in listening to others, we will learn to look at the world with different eyes and come to appreciate the richness of human experience as manifested in different cultures and traditions.  We will also learn to appreciate more fully the important values inspired by Christianity, such as the vision of the human person, the nature of marriage and the family, the proper distinction between the religious and political spheres, the principles of solidarity and subsidiarity, and many others.

How, then, can communication be at the service of an authentic culture of encounter?  What does it mean for us, as disciples of the Lord, to encounter others in the light of the Gospel?  In spite of our own limitations and sinfulness, how do we draw truly close to one another?  These questions are summed up in what a scribe – a communicator – once asked Jesus: “And who is my neighbour?” (Lk 10:29).  This question can help us to see communication in terms of “neighbourliness”.  We might paraphrase the question in this way: How can we be “neighbourly” in our use of the communications media and in the new environment created by digital technology?  I find an answer in the parable of the Good Samaritan, which is also a parable about communication.  Those who communicate, in effect, become neighbours.  The Good Samaritan not only draws nearer to the man he finds half dead on the side of the road; he takes responsibility for him.  Jesus shifts our understanding: it is not just about seeing the other as someone like myself, but of the ability to make myself like the other.  Communication is really about realizing that we are all human beings, children of God.  I like seeing this power of communication as “neighbourliness”.

Whenever communication is primarily aimed at promoting consumption or manipulating others, we are dealing with a form of violent aggression like that suffered by the man in the parable, who was beaten by robbers and left abandoned on the road.  The Levite and the priest do not regard him as a neighbour, but as a stranger to be kept at a distance.  In those days, it was rules of ritual purity which conditioned their response.  Nowadays there is a danger that certain media so condition our responses that we fail to see our real neighbour.

It is not enough to be passersby on the digital highways, simply “connected”; connections need to grow into true encounters.  We cannot live apart, closed in on ourselves.  We need to love and to be loved.  We need tenderness.  Media strategies do not ensure beauty, goodness and truth in communication.  The world of media also has to be concerned with humanity, it too is called to show tenderness.  The digital world can be an environment rich in humanity; a network not of wires but of people.  The impartiality of media is merely an appearance; only those who go out of themselves in their communication can become a true point of reference for others.  Personal engagement is the basis of the trustworthiness of a communicator.  Christian witness, thanks to the internet, can thereby reach the peripheries of human existence.