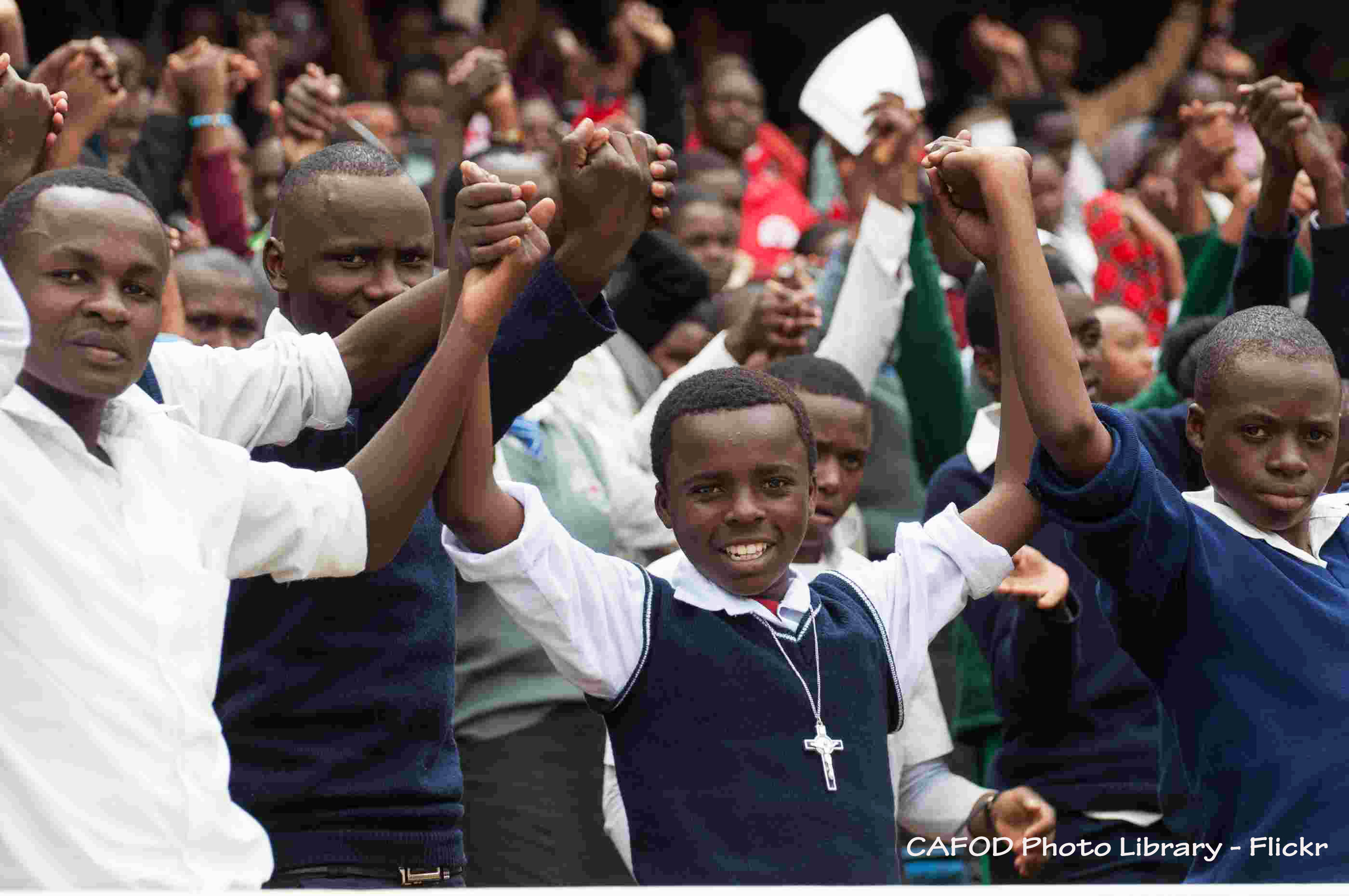 That Christians in Africa, in imitation of the Merciful Jesus, may give prophetic witness to reconciliation, justice, and peace.

Today Bangui becomes the spiritual capital of the world. The Holy Year of Mercy starts early in this land of Africa. A land which has suffered for years from war and hatred, lack of understanding, lack of peace; in this land of sufferings there are many countries bearing the cross of war. Bangui now becomes the spiritual capital of prayer for the Father’s mercy. Let us all implore peace, mercy, reconciliation, forgiveness and love. For Bangui, for the entire Central African Republic, for the whole world, for those countries experiencing war, let us ask for peace! Now, all together, let us ask for love and peace. […]

On this first Sunday of Advent, the liturgical season of joyful expectation of the Saviour and a symbol of Christian hope, God has brought me here among you, in this land, while the universal Church is preparing for the opening of the Jubilee Year of Mercy, which we inaugurated here today. I am especially pleased that my pastoral visit coincides with the opening of this Jubilee Year in your country. From this cathedral I reach out, in mind and heart, and with great affection, to all the priests, consecrated men and women, and pastoral workers of the nation, who are spiritually united with us at this moment. Through you, I would greet all the people of the Central African Republic: the sick, the elderly, those who have experienced life’s hurts. Some of them are perhaps despairing and listless, asking only for alms, the alms of bread, the alms of justice, the alms of attention and goodness. All of us are looking for God’s grace, for the alms of peace.

But like the Apostles Peter and John on their way to the Temple, who had neither gold nor silver to give to the paralytic in need, I have come to offer God’s strength and power; for these bring us healing, set us on our feet and enable us to embark on a new life, to “go across to the other side” (cf. Lk 8:22).

Jesus does not make us cross to the other side alone; instead, he asks us to make the crossing with him, as each of us responds to his or her own specific vocation. We need to realize that making this crossing can only be done with him, by freeing ourselves of divisive notions of family and blood in order to build a Church which is God’s family, open to everyone, concerned for those most in need. This presupposes closeness to our brothers and sisters; it implies a spirit of communion. […]

The salvation proclaimed by God has an invincible power which will make it ultimately prevail. After announcing to his disciples the terrible signs that will precede his coming, Jesus concludes: “When these things begin to take place, look up and raise your heads, because your redemption is drawing near” (Lk 21:28). If Saint Paul can speak of a love which “grows and overflows”, it is because Christian witness reflects that irresistible power spoken of in the Gospel. It is amid unprecedented devastation that Jesus wishes to show his great power, his incomparable glory (cf. Lk 21:27) and the power of that love which stops at nothing, even before the falling of the heavens, the conflagration of the world or the tumult of the seas. God is stronger, more powerful, than all else. This conviction gives to the believer serenity, courage and the strength to persevere in good amid the greatest hardships. Even when the powers of Hell are unleashed, Christians must rise to the summons, their heads held high, and be ready to brave blows in this battle over which God will have the last word. And that word will be one of love and peace!

To all those who make unjust use of the weapons of this world, I make this appeal: lay down these instruments of death! Arm yourselves instead with righteousness, with love and mercy, the authentic guarantors of peace. As followers of Christ, dear priests, religious and lay pastoral workers, here in this country, with its suggestive name, situated in the heart of Africa and called to discover the Lord as the true centre of all that is good, your vocation is to incarnate the very heart of God in the midst of your fellow citizens. May the Lord deign to “strengthen your hearts in holiness, that you may be blameless before our God and Father at the coming of our Lord Jesus with all his saints” (1 Th 3:13). Reconciliation, forgiveness, love and peace! Amen.

OPENING OF THE HOLY DOOR AT THE CATHEDRAL OF BANGUI AND
HOLY MASS WITH PRIESTS, MEN AND WOMEN RELIGIOUS, CATECHISTS AND YOUNG PEOPLE
FRANCIS
29 November 2015

For Evangelization: Christians of Africa, witnesses for peace

That Christians in Africa, in imitation of the Merciful Jesus, may give prophetic witness to reconciliation, justice, and peace.