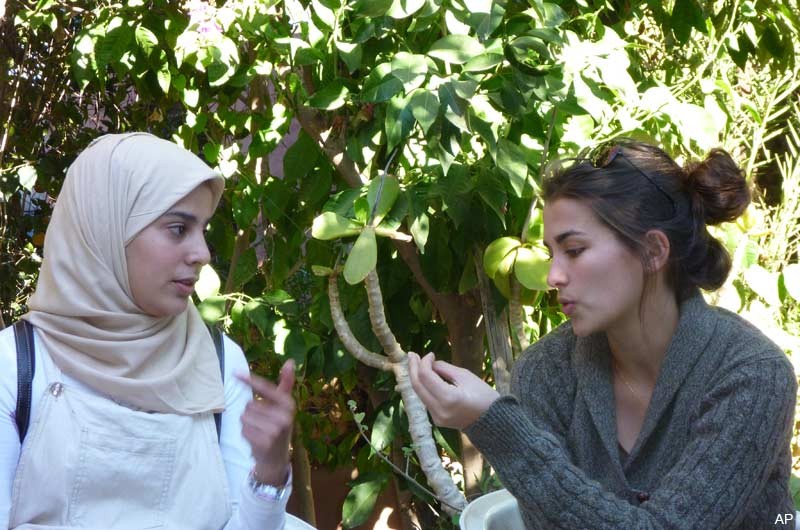 That in every country of the world, women may be honored and respected and that their essential contribution to society may be highly esteemed.

[…] I give thanks to the Lord with you for all the good which the Italian Women’s Centre has accomplished during its almost 70 years of life, for the works you have implemented in the field of education and human advancement, and for the witness it has given on the role of women in society and in the ecclesial community. In fact, in the span of these last decades, along with other cultural and social transformations, the woman’s identity and role in the family, in society and in the Church, have seen notable changes, and in general the participation and responsibility of women has been increasing.

The discernment by the Magisterium of the Popes has also been and is important in this process. In a special way we should mention Bl. John Paul II’s Apostolic Letter Mulieris Dignitatem of 1988, on the Dignity and Vocation of Women, a document that, in line with the teaching of Vatican II, recognized the moral strength of woman, her spiritual strength (cf. n. 30); and we also remember the Message for the 1995 World Day of Peace on the theme “Women: Teachers of Peace”.

I recalled the indispensable contribution which women make to society, particularly through the sensitivity and intuition they show to others, the weak and the vulnerable. I congratulate you on seeing that many women share pastoral responsibilities with priests, helping to guide people, families and groups and offering new contributions to theological reflection. Indeed, I hoped that increasing space may be offered to women for a more widespread and incisive presence in the Church (cf. Evangelium Gaudium, n. 103).

These new opportunities and responsibilities which have opened, and which I sincerely hope may further expand by the presence and work of women, both within the ecclesial and civil and professional spheres, cannot make us forget the woman’s irreplaceable role in the family. The gifts of refinement, particular sensitivity and tenderness, with which the woman’s spirit is richly endowed, represent not only a genuine strength for the life of the family, for spreading a climate of serenity and harmony, but a reality without which the human vocation cannot be fulfilled.

If in the world of work and in the public sphere a more incisive contribution of women’s genius is important, this contribution remains essential within the family, which for we Christians is not simply a private place, but rather that “domestic Church”, whose health and prosperity is a condition for the health and prosperity of the Church and of society itself. Let us think of Our Lady: Our Lady creates something in the Church that priests, bishops and Popes cannot create. She is the authentic feminine genius. And let us think about Our Lady in families — about what Our Lady does in a family. It is clear that the presence of a woman in the domestic sphere is more necessary than ever, indeed for the transmission of sound moral principles and for the transmission of the faith itself to future generations.

At this point one spontaneously asks: how can one increase an effective presence in so many areas of the public sphere, in the world of work and in the places where the most important decisions are taken, and at the same time maintain a presence and preferential and wholly special attention to the family? And this is the field for discernment which, in addition to the reflection on the reality of women in society, requires assiduous and persevering prayer.

It is in dialogue with God, that is illumined by his Word and watered by the grace of the sacraments, that the Christian woman seeks ever anew to respond to the Lord’s call, in her practical circumstances.

Such prayer is always supported by Mary’s maternal presence. May, she, who cared for her divine Son, who prompted the first miracle at the Wedding Feast of Cana, who was present on Calvary and at Pentecost, indicate to you the path to take in order to deepen the meaning and role of women in society in order to be completely faithful to the Lord Jesus Christ and to your mission in the world. Thank you!

Women may be highly esteemed

I wish to share a few words with you, even if briefly, on the important theme that you have been discussing these days: woman’s vocation and mission in our time. I thank you for the contribution you have made as we commemorate the 25th anniversary of Pope John Paul II’s Apostolic Letter Mulieris dignitatem: a historic document, the first of the Papal Magisterium entirely dedicated to the subject of woman. You have especially studied the point which states that God entrusts man, the human being, in a special way to woman (cf. n. 30).
What does this “special entrusting”, this special entrusting of the human being to woman mean? It seems evident to me that my Predecessor is referring to motherhood. Many things can change and have changed in cultural and social evolution, but the fact remains that it is woman who conceives, carries and delivers the children of men. And this is not merely a biological fact; it entails a wealth of implications both for woman herself, her way of being, and for her relationships, her relation to human life and to life in general. In calling woman to motherhood, God entrusted the human being to her in an entirely special way.
Here, however, two dangers are ever present, two opposite extremes that mortify woman and her vocation. The first is to reduce motherhood to a social role, to a task which, though regarded as noble, in fact, sets the woman and her potential aside and does not fully esteem her value in the structure of the community. This may happen both in civil and ecclesial circles. And, as a reaction to this, there is another danger in the opposite direction, that of promoting a kind of emancipation that, in order to fill areas that have been taken away from the male, deserts the feminine attributes with all it precious characteristics. And here I would like to stress that woman has a particular sensitivity to the “things of God”, above all in helping us understand the mercy, tenderness and love that God has for us. I also like to think of the Church not as an “it” but as a “she”. The Church is woman, she is mother, and this is beautiful. You must consider and go deeper into this.
[…] In the Church as well, it is important to ask oneself: what sort of presence does woman have? I suffer — to tell you the truth — when I see in the Church or in Church organizations that the role of service, which we all have and should have… when a woman’s role of service slides into servidumbre [servitude]. I don’t know if that is how you say it in Italian. Do you understand me? Service. When I see women carrying out acts of servitude, it is because the role a woman should play is not properly understood. What presence do women have in the Church? Can it be developed further? This question is close to my heart and that is why I wanted to meet with you — outside the norm, because a meeting of this kind was not scheduled — to bless you and your undertaking. […]